They seem completely indifferent to the very low tide and air temperature. It looks like a well-established morning ritual. 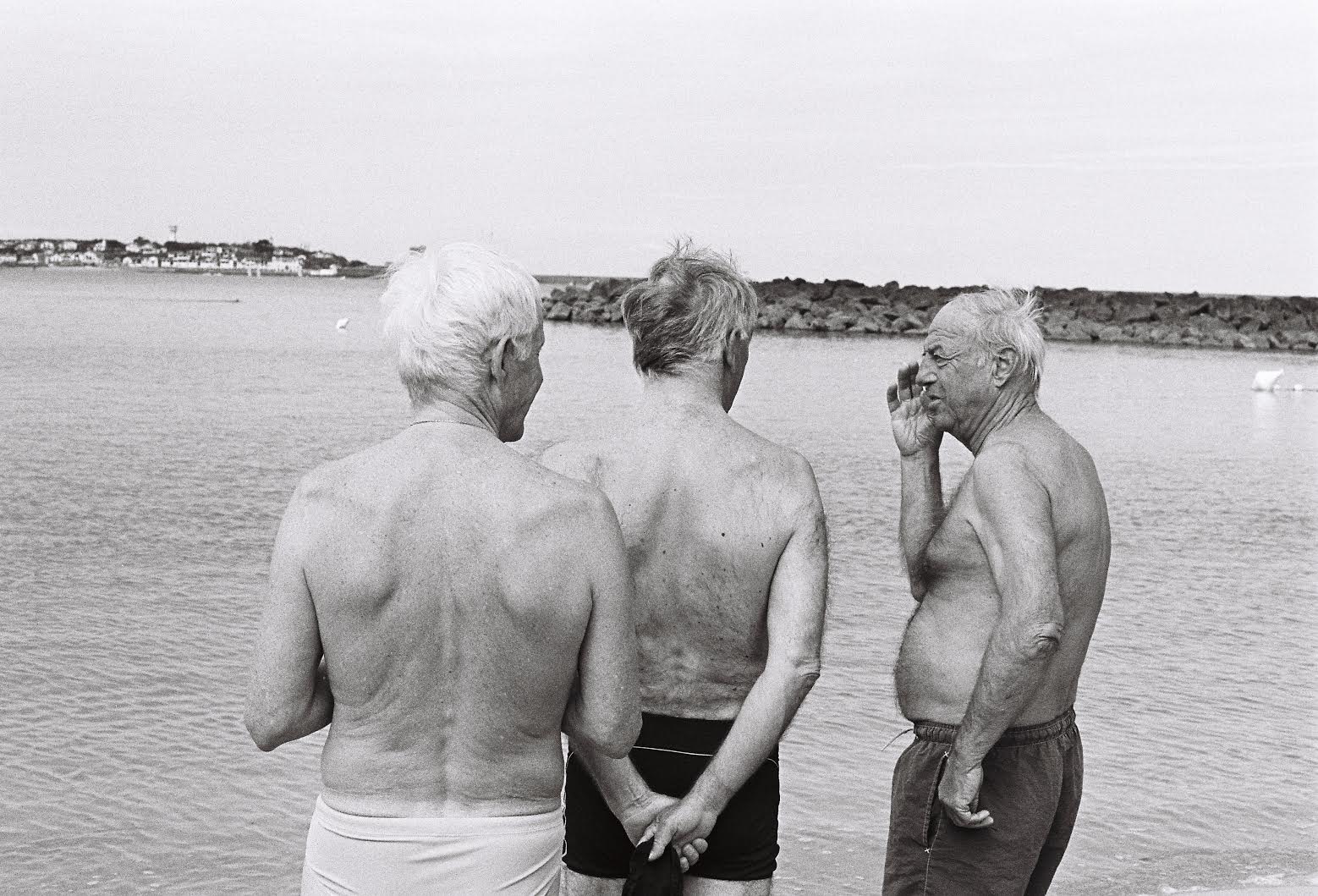 This is not just a story about swimming. This is about an ageless quest, an abiding love, and a daily chase. Created in 1990, the Izurdiak Club (meaning Dolphins in Basque) gathers more than 90 members. During ten days, French photographer Juliette Garms followed a group of seniors used to go swimming in the ocean everyday of the year in Saint Jean de Luz. "Earlier this year, I took portraits & interviewed them about their experience and motivation to be part of such a tight-up social group. I am deeply interested in human stories. In this story, I tried to depict the mood and the characters in an intimate way. My pictures are the witnesses of this emotional and physical exploration. " 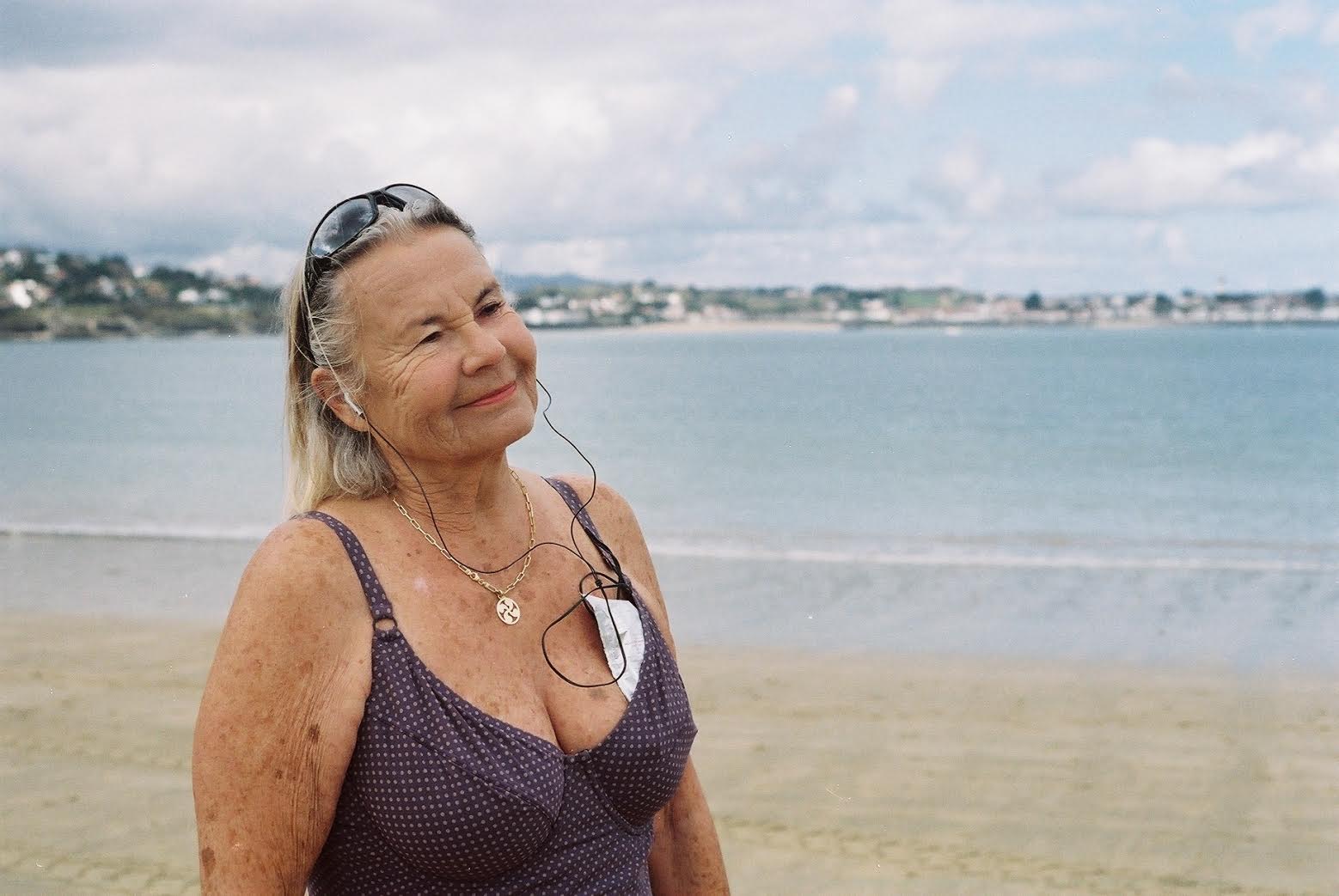 After a year spent in the lively city of Johannesburg, Juliette remembers arriving in the rainy and quiet city of Biarritz in the middle of winter. Quite brutally, like a surprising stolen kiss, she rediscovered the daily delicious life of the seaside french town. "Sweet, gentle but rather lethargic," she says. "On the first days of September, this buzzing coastal town falls asleep as soon as tourists leave. There is no much activity, except for a few old locals taking their daily morning walk and a noisy tractor stirring the sand. Almost all the houses are inhabited, shutters are closed, patiently awaiting for the summer season to be set alive again."

Throughout her series of analog pictures, the 25 years-old French photographer intentionally worked with diverse films, black and whites, colors and did some double exposure shots. Far from the vision of crowded beaches of the Basque Country, Juliette Garms captured a timeless routine. "Seniors in their bathing suits are going swimming in the ocean, sometimes in groups, sometimes alone. They seem completely indifferent to the very low water and air temperature."

With her sunglasses on her hair, and her basque cross around her neck, Marie-Madeleine, known as Magda' is probably the senior of the club. "She must be 80 years old, but nobody really knows," Juliette explains. "Tanned, with her reedy voice, Madga arrives at the club in her white bath rob and always goes swimming alone. But first, she takes a walk on the beach with her old walkman wrapped up in a plastic, 'because I already lost two of these, you know'. I ask her what she's listening to. 'Today, it is Bach! You know Johann Sebastian Bach, right? Do you know that one can dance on Bach?' She joined the club in 1995. 'I go swimming everyday except when it is storming and when the water is too dirty. I am a real one. I stay in the water from ten to fifteen minutes. When I don't swim, I don't spend a good day’. 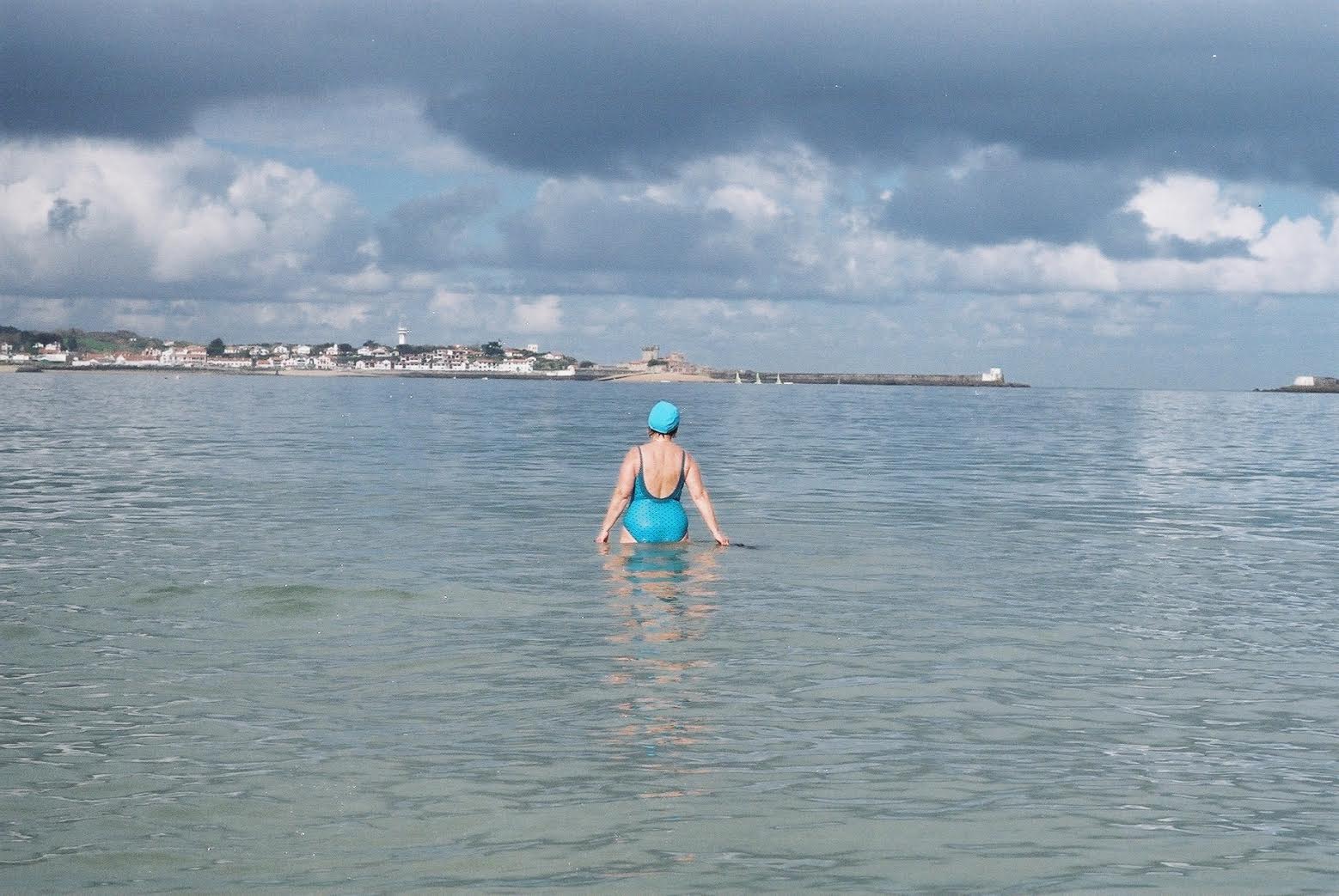 There're also the Musketeers, and this other woman in a one-suit bikini.  "Determined, she walks toward the ocean and jumps in the cold water without a second of hesitation. I observed her swimming, alone and peaceful, like a little dot in this immensity." Beatrice wears a blue swimming suit that goes with her bathing cap, her blue glasses, blue earrings and blue make-up. "It depends on my mood, she explains, I often change colors. When I feel sad, it is black, today I feel good so it is blue", Beatrice said to Juliette on that morning when she collected her words in an intimate moment. "There is a really nice atmosphere in the club, it is good for morale. It is like a big family'. Beatrice is one of the member that touched Juliette the most. "She has this aura of vulnerability and gentleness around her. Two years ago, a highly traumatic event happened in her life. She lost a loved one. Both the ocean and the dolphins helped her lifting her spirits."

Then, there's this man, in his late 70s, repeating the same scenario. Always. "Glasses and bathing cap on, he swims energetically for fifteen minutes. He then gets out and disappears into a cabin on the beach. This parade carries on the whole morning. It looks like a well-established morning ritual." 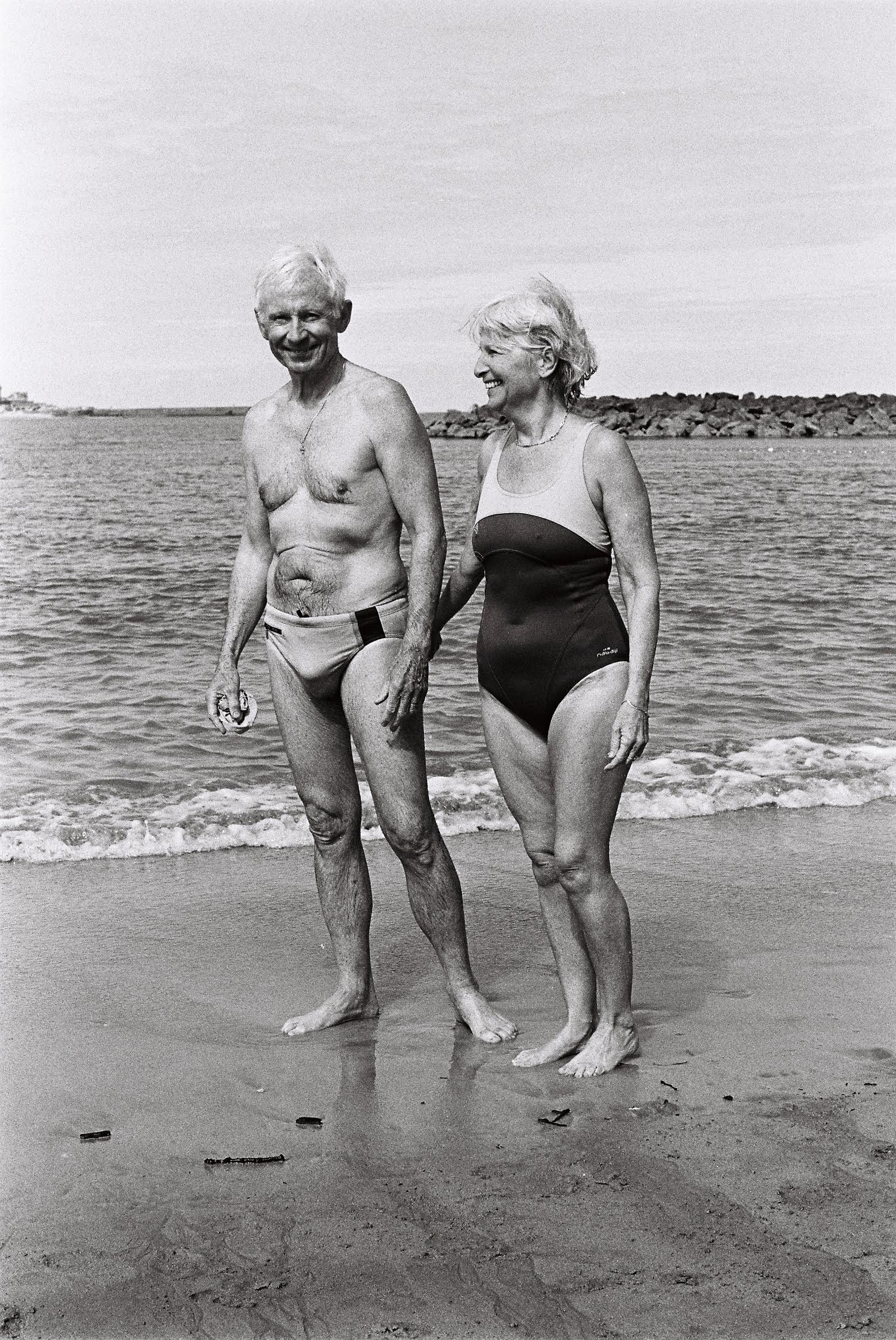 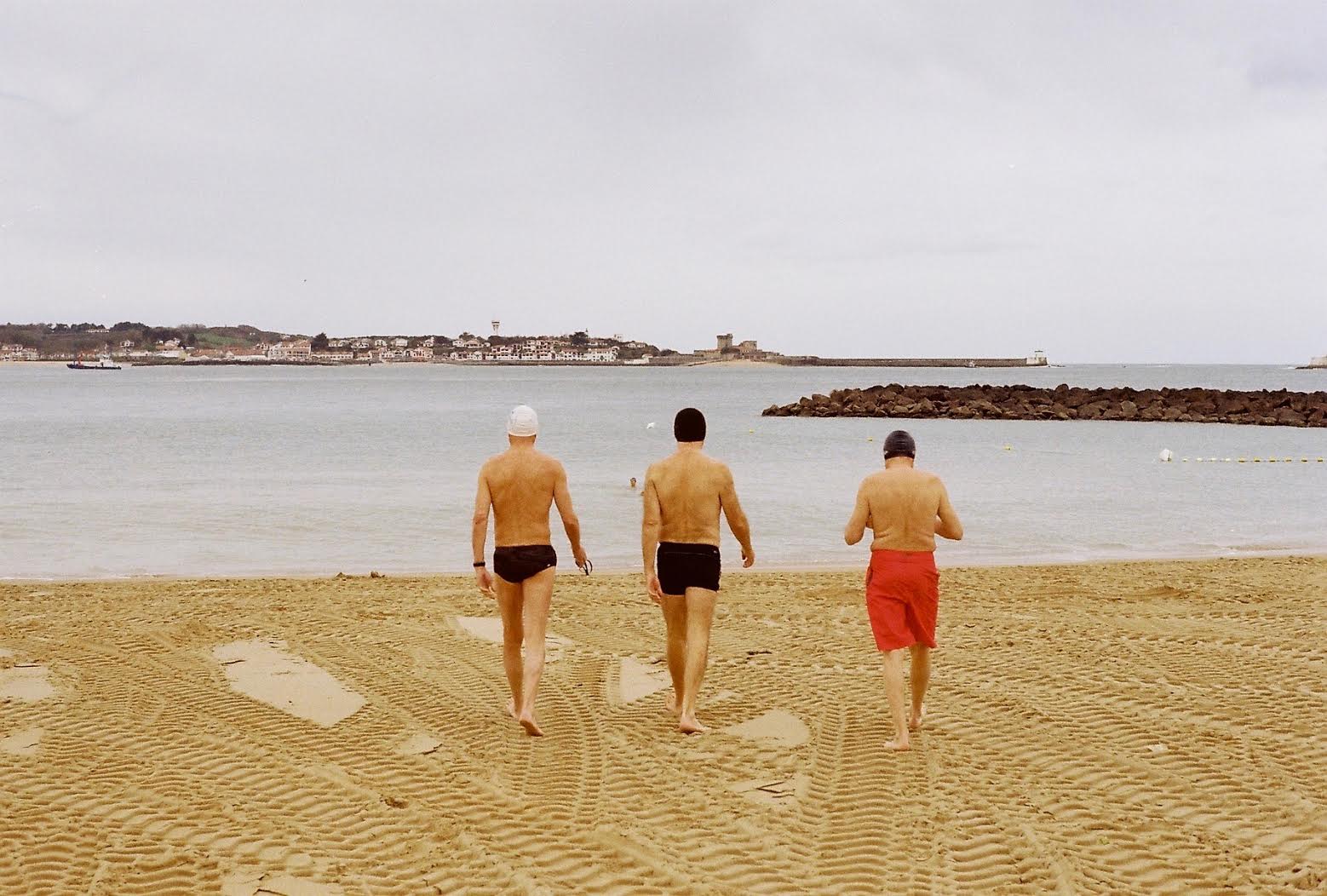 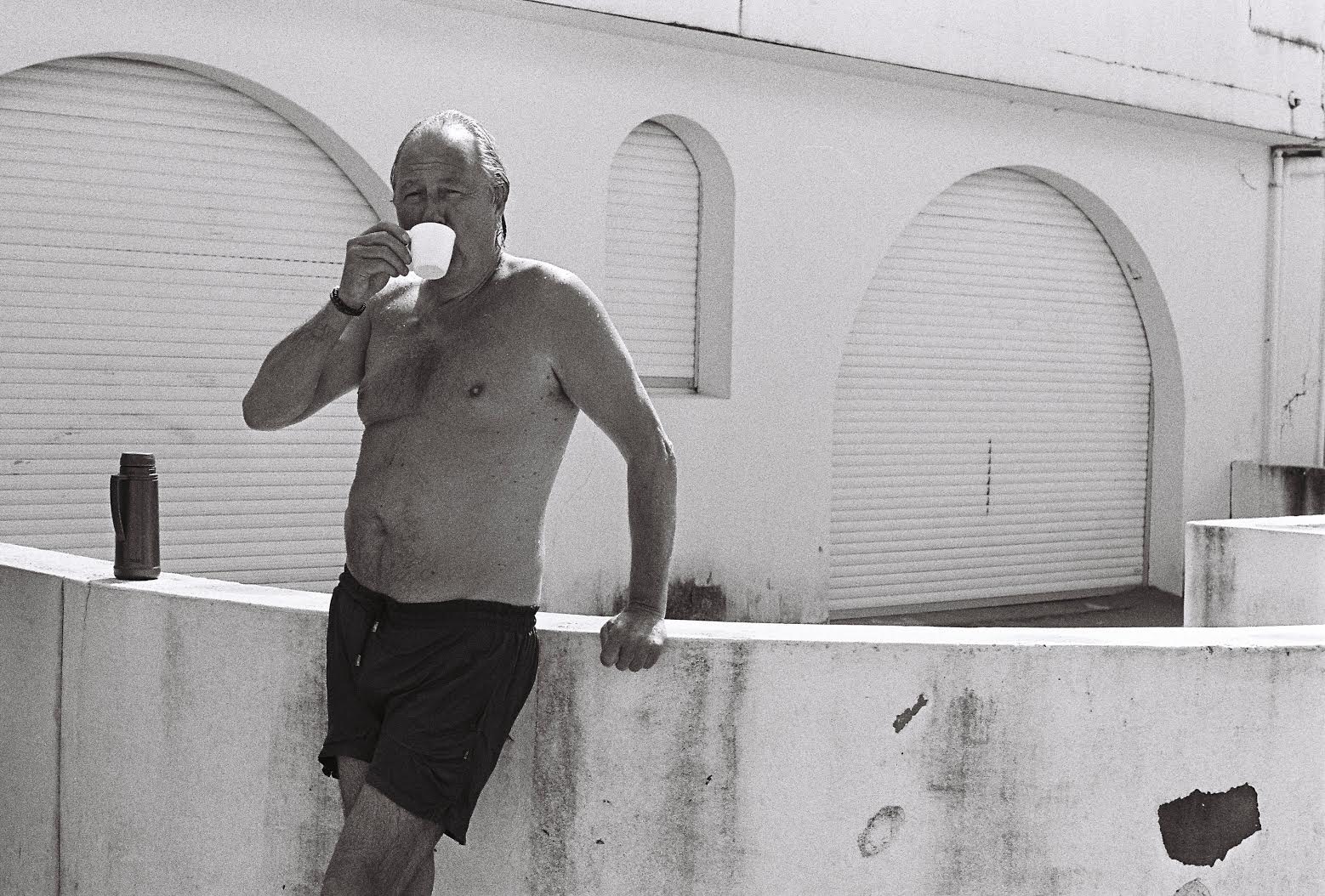 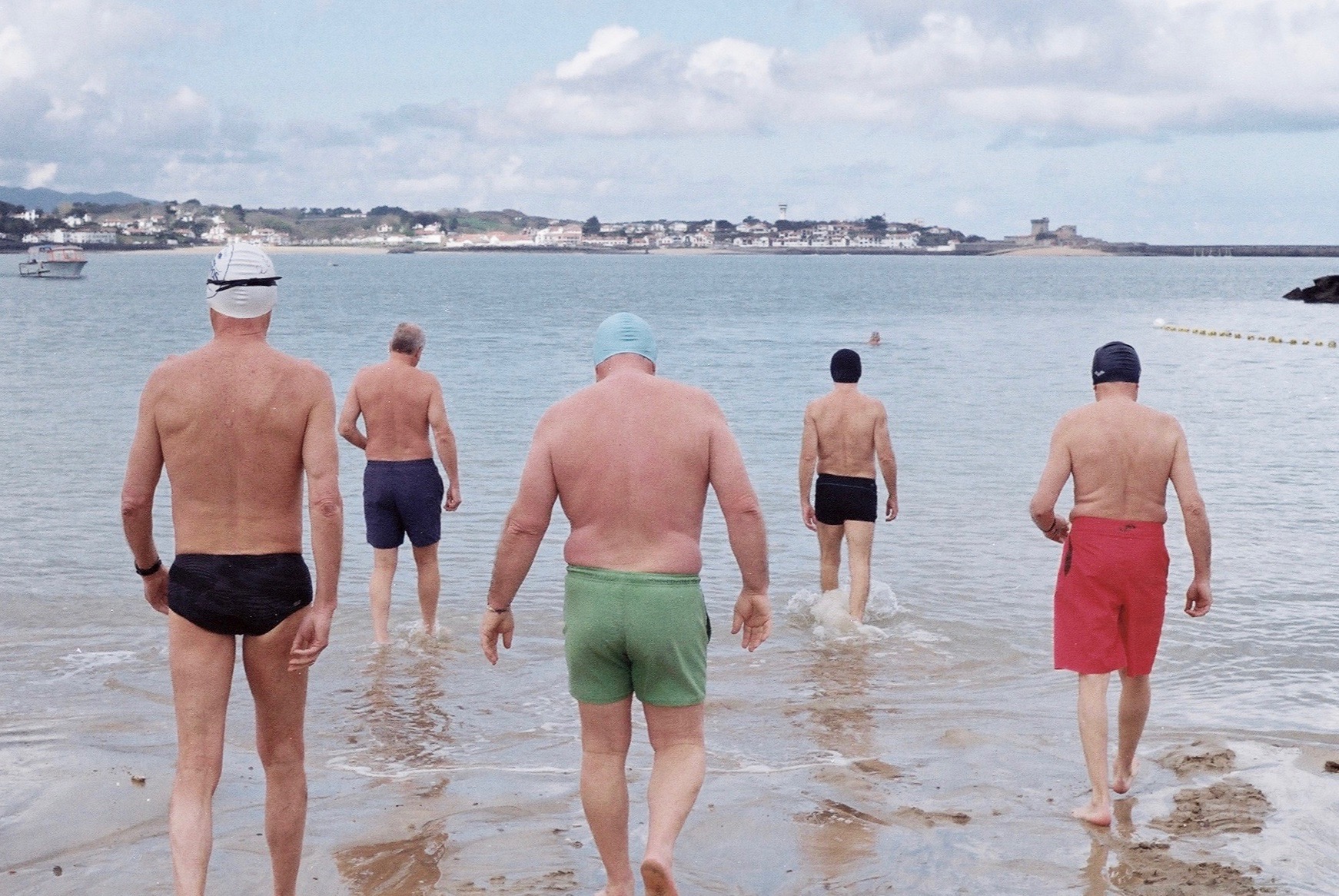 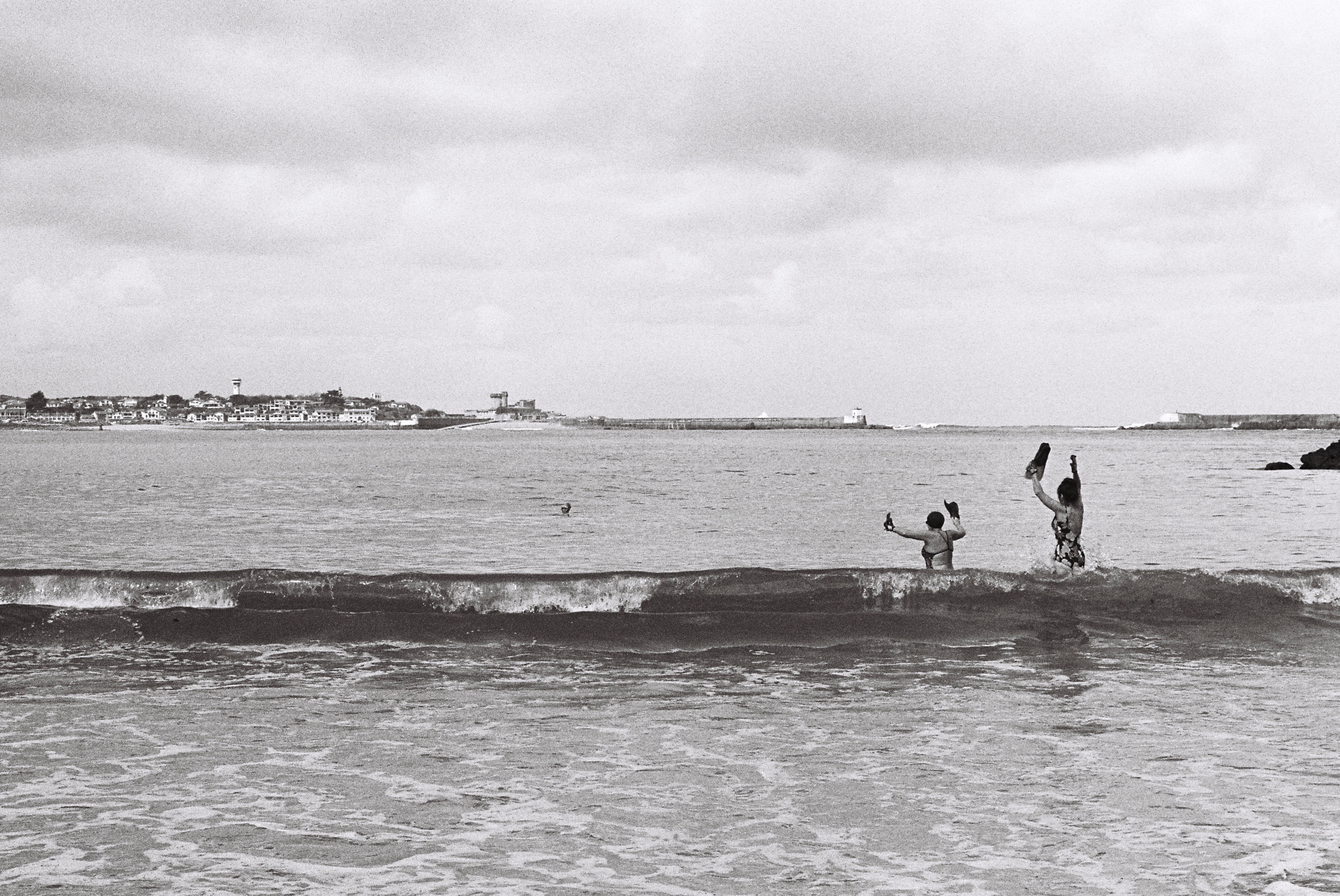 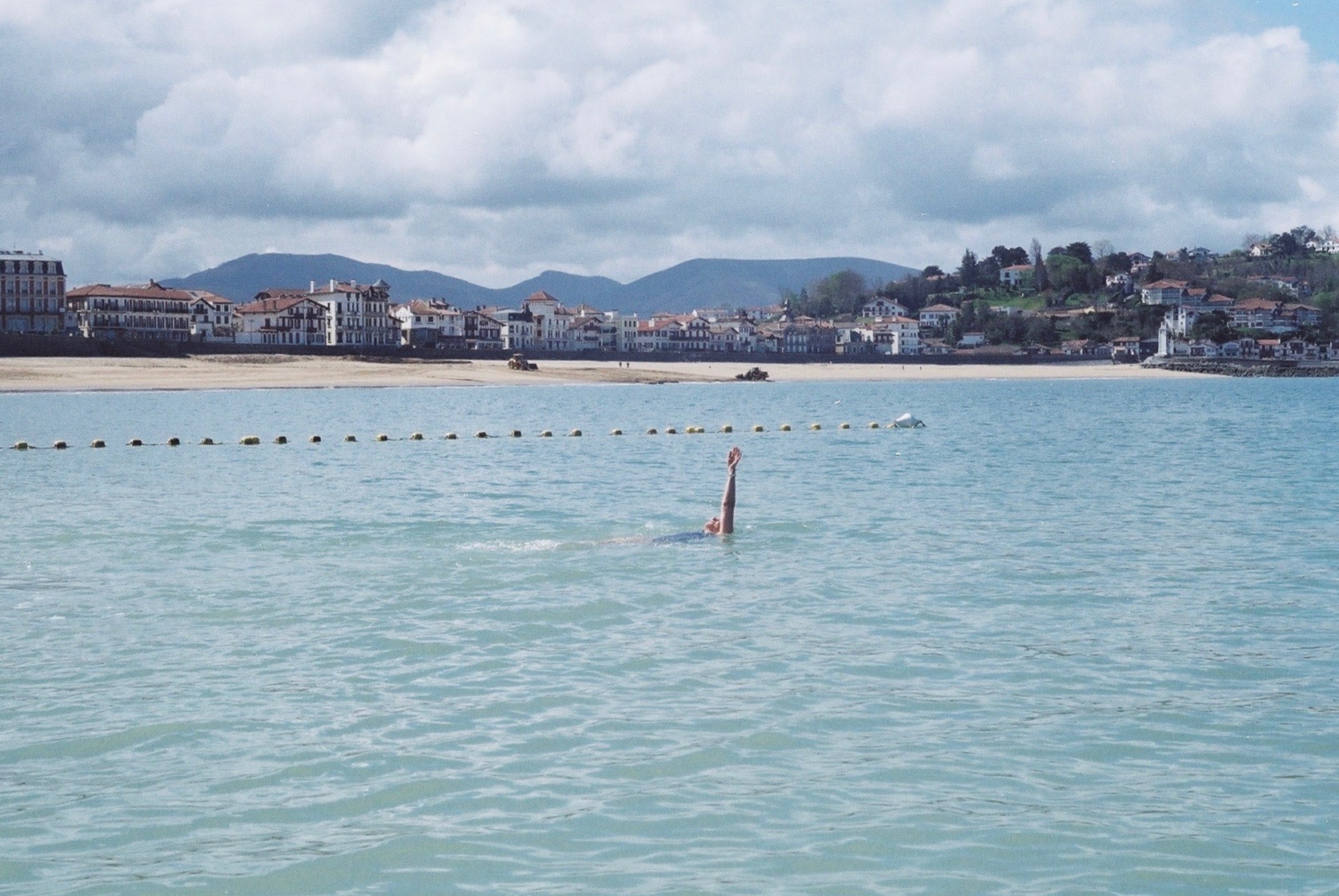 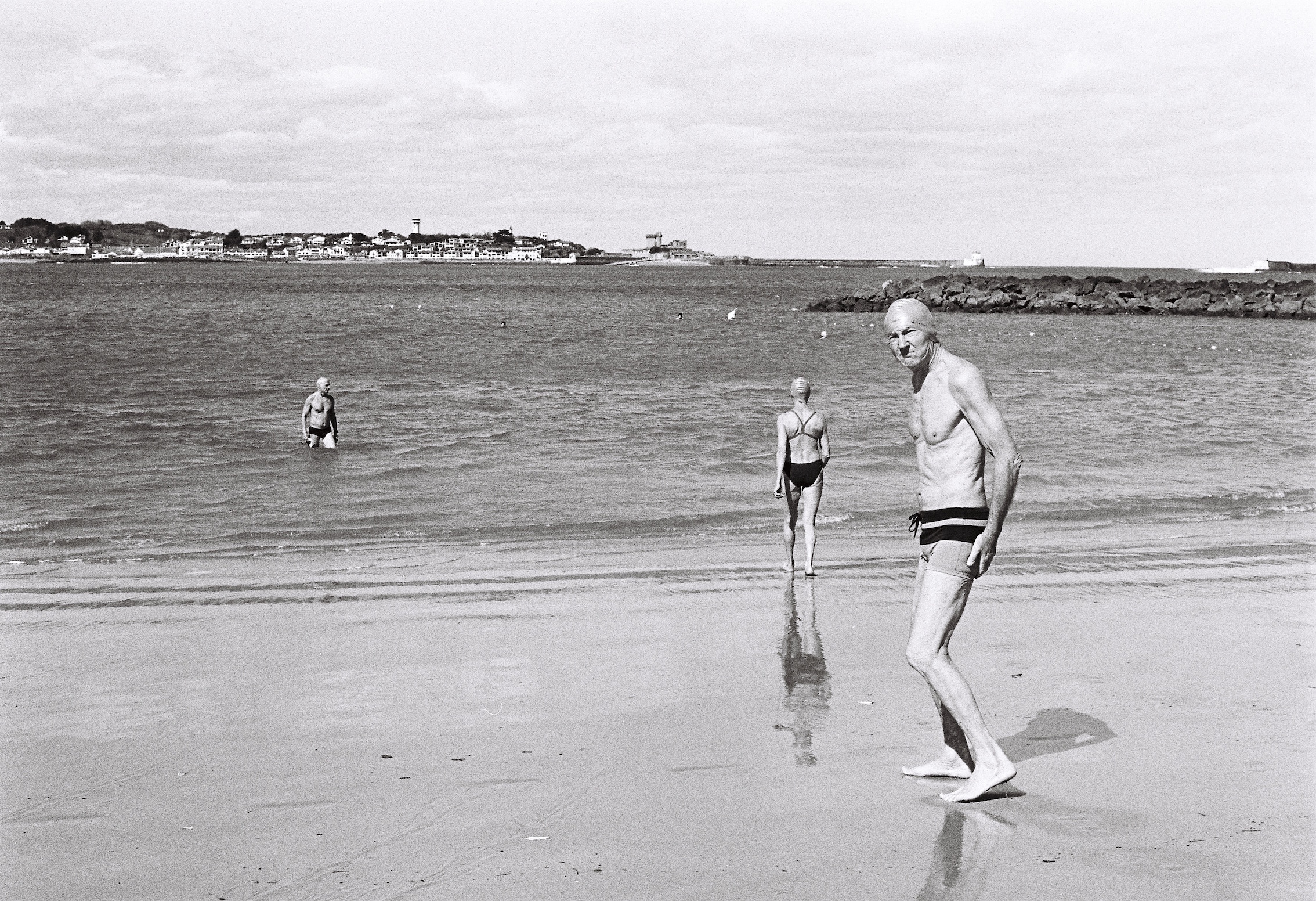 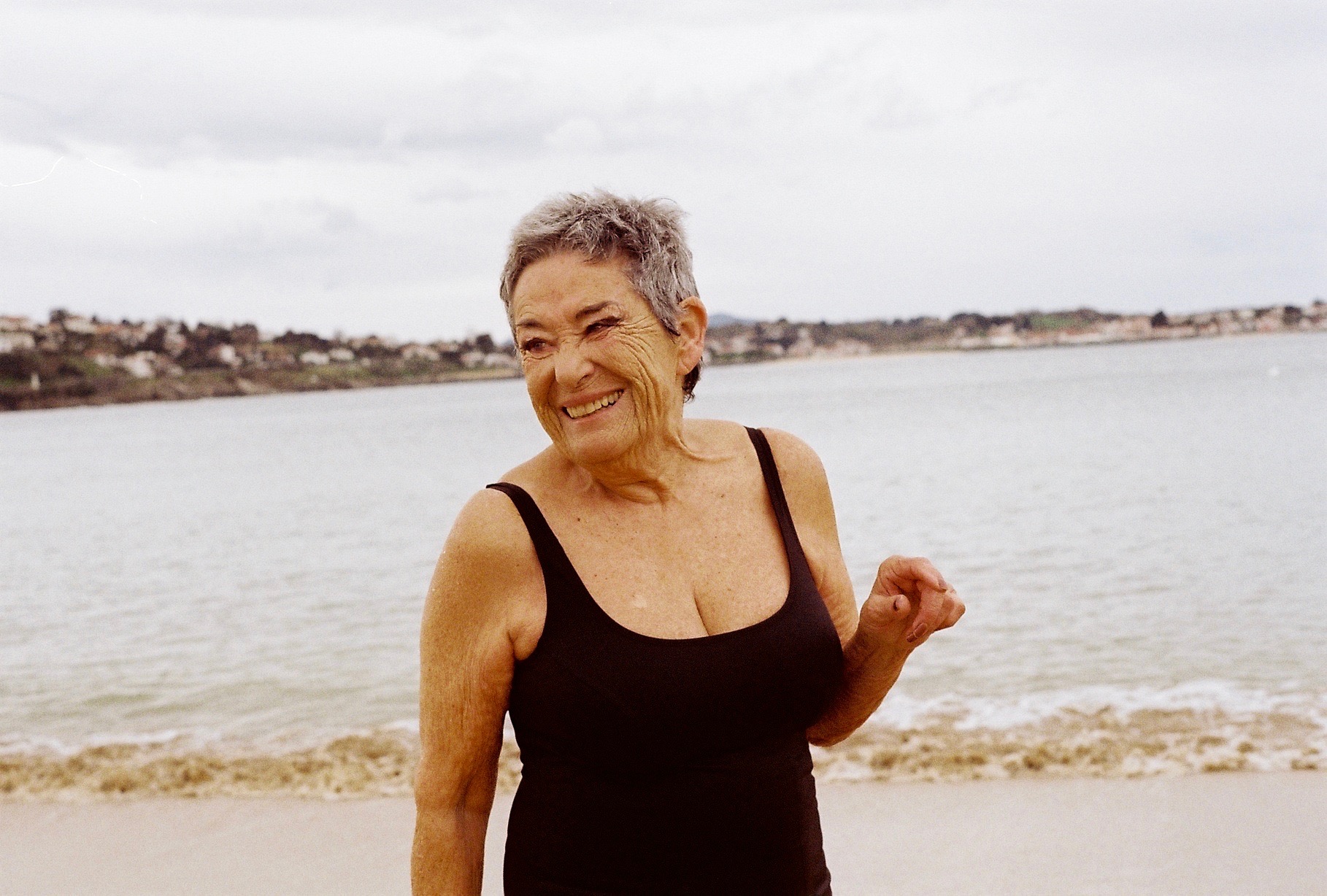 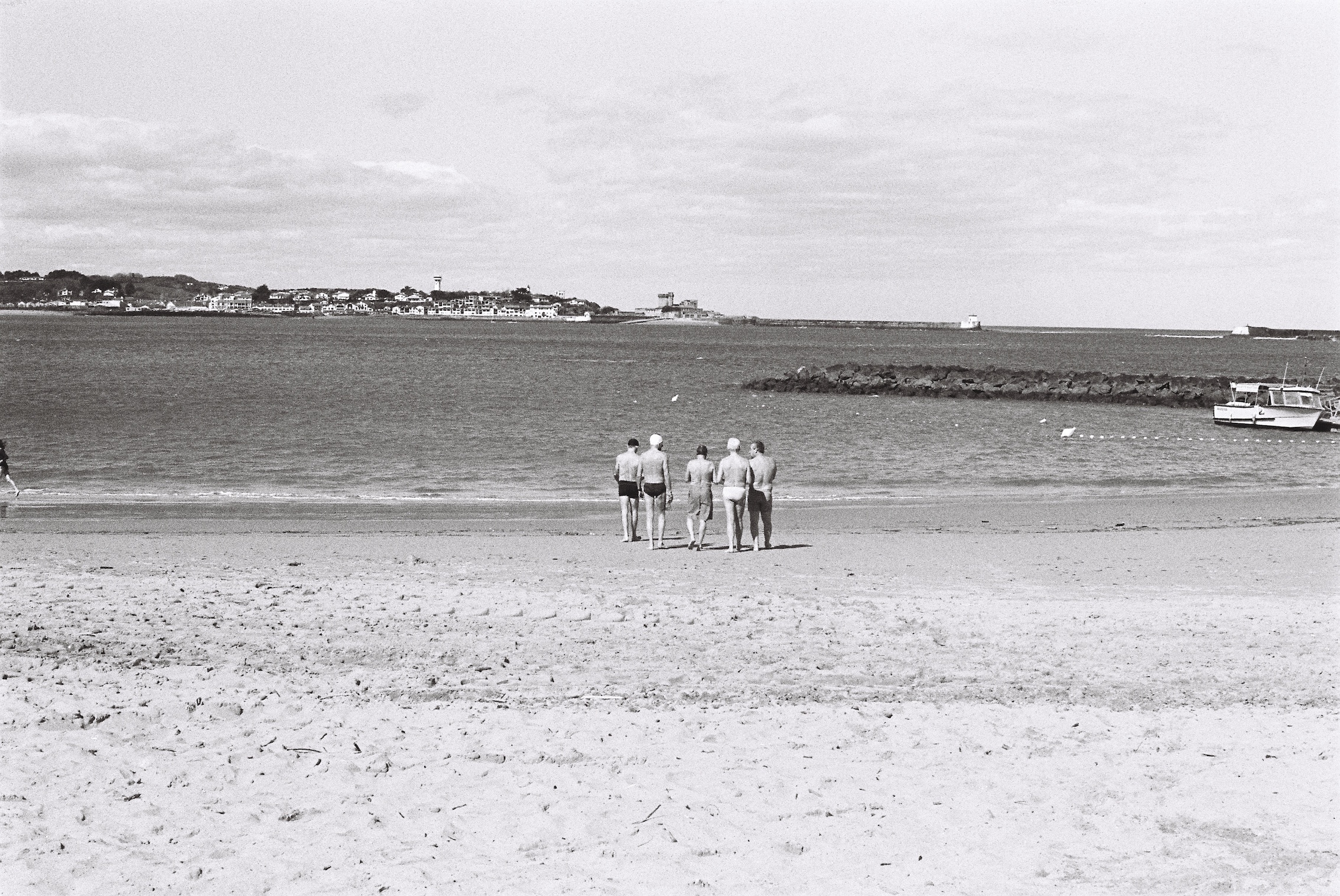 Discover more of Juliette Garms' work on her website.