Four-time world record-holder, Guillaume Néry is a French free-diving champion who specializes in deep diving. Over the years, he has perfected this discipline to an art form combining aesthetics, performance and exploration. His latest short film entitled »Haven« recounts the exploration of the largest wreck in Mediterranean Sea residing at a depth of 40 to 50 meters. Here we discuss the discovery of this sunken giant with the multiple world record holder, and his devotion to free-diving. 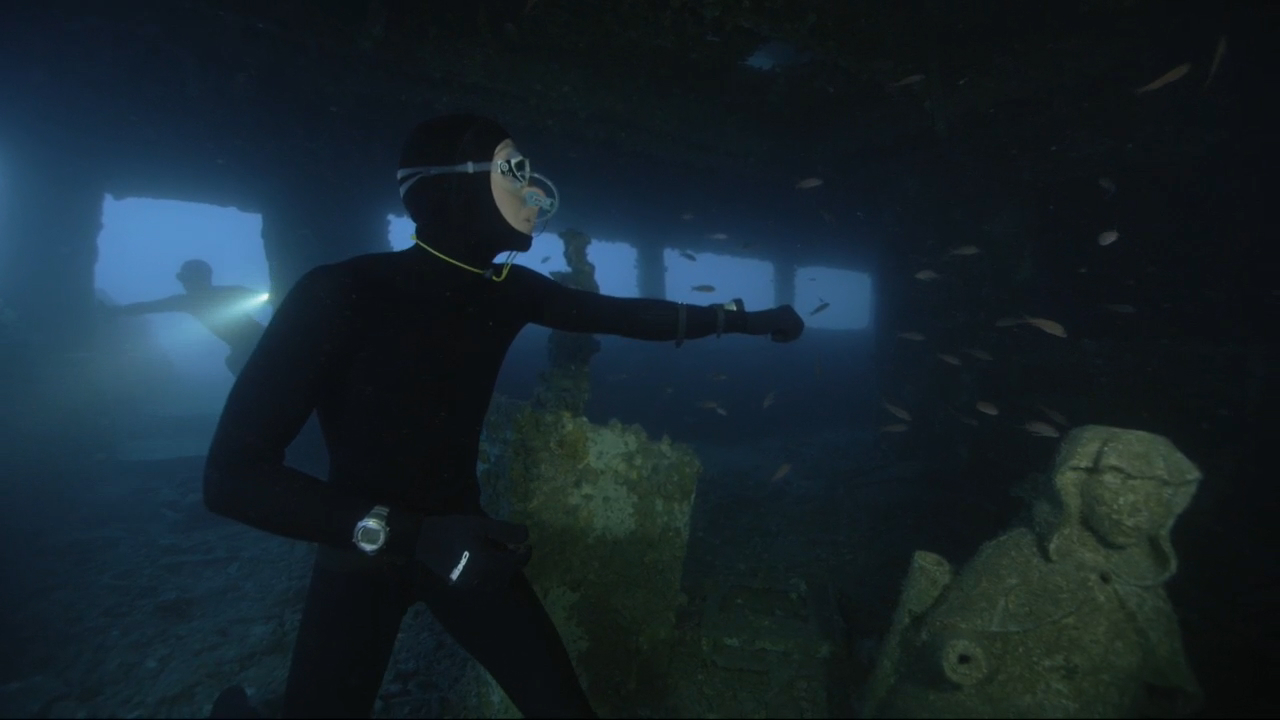 Free-diving is diving underwater as deep as possible with only one breath. What is your definition of free-diving?

To me, free-diving is both a lifestyle and a passion. So when I stopped competing last September, it didn’t change anything in my life. Apnea is still an integral part of my everyday life and has infiltrated every part of it.  Professionally, everything I do has a close link to free-diving. I hold conferences for societies in order to share this universe with passionate people during diving lessons, or with people who don’t know anything about this practice but for whom it can be a way to be used in their life or at work. Free-diving is a way to transmit values.

You spend most of your time in the water and get often close to abysses. How do you define your relationship with the ocean?

I maintain an almost carnal link with the ocean. And I talk about »the sea« rather than the ocean because I come from the Mediterranean Sea and at home, we say »we go to the sea«. To me, the sea gives the impression of reconnecting to the matrix of what is the deep nature of Planet Earth. The Earth is the ocean planet – when we look at it from the space, we only see a blue point. When I dive into the sea, I really have this feeling of belonging to this planet. The ocean, the sea are its true identity. I’m also a mountain lover, a lover of wide open spaces. After a while, I need to reconnect with the sea.  I just need to immerse myself and be totally enveloped by the sea. It’s something I do anytime of the year, during summer or winter when the water is cold. I need to be in contact with water to remind me this idea of origins, this strong idea of belonging that I can only feel towards these natural elements. I think that every human being has this strong connection to the sea, to fascinate or frighten. It is the way of connecting people, it is also a way to travel. The sea is a part of man’s history. I really feel that when I go for a swim. Every time, it brings me a kind of rebirth.

It’s funny how you talk about swimming rather than diving?

Yes, I use the word ‘swimming’ on purpose because it’s not always in deep dives that I feel this connection to nature. It can be during anecdotal and innocent swims, in the middle of a week, or when there’s nobody in the water, that I find a true connection to nature. I can spend just 15 minutes in the water, only few metres-deep and I have the feeling of reconnecting to something. I usually have a crazy lifestyle, between phone calls, flights, trips, etc. So I need these precious moments in the water where I can reset the counters. 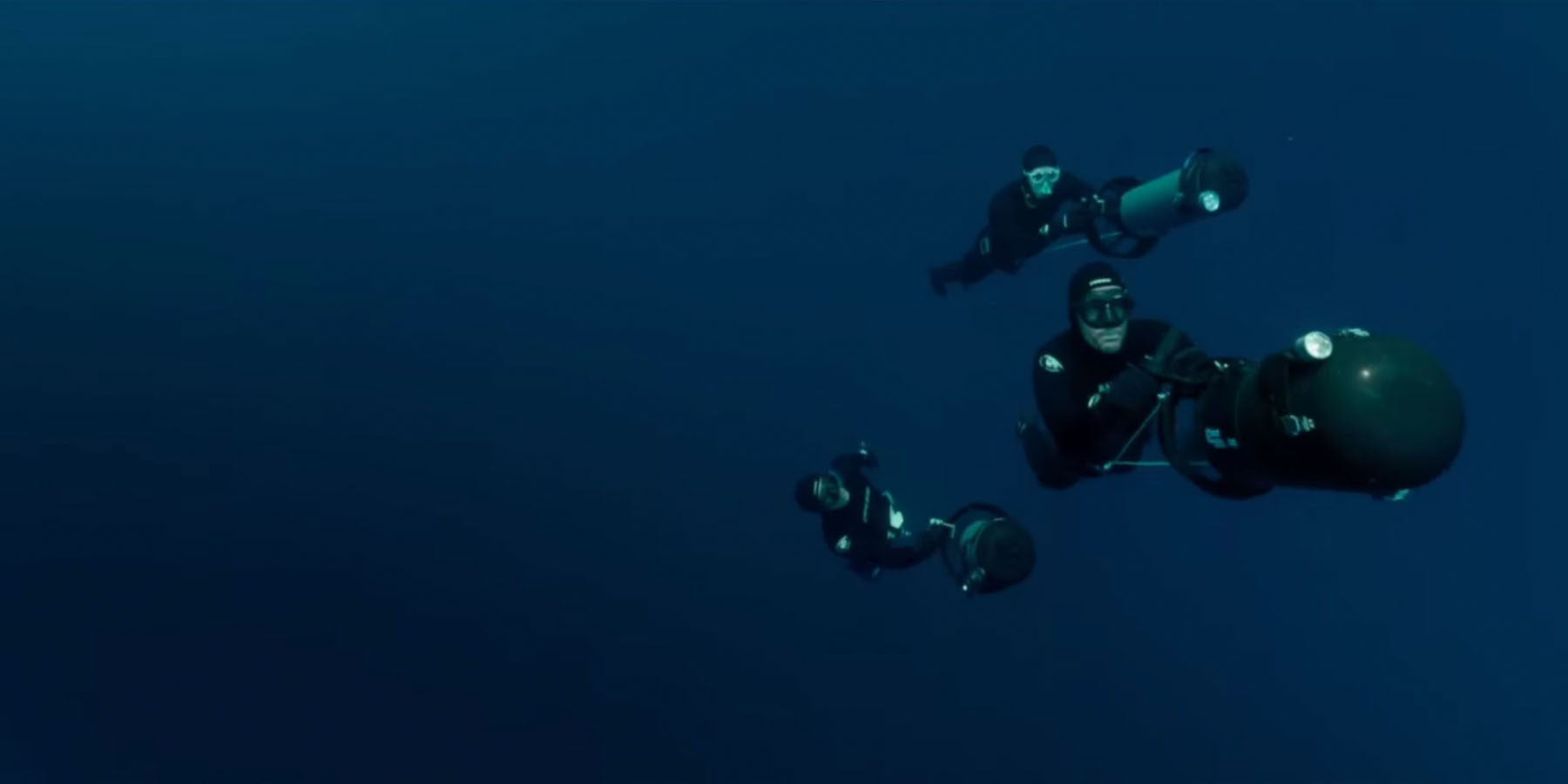 Throughout your films today, you create a bridge between people and free-diving. You give access to a world not everyone has the chance to discover. Is it an important role for you?

It is one of our ambitions indeed. I want to make short films that are easy to watch and free online. I want to make films that stage the underwater world in an original and off-beat way. But we also want to make films that speak to everybody. I try to behave underwater not like a fish or a dolphin, but as an earthling. I walk, I run, I jump in the water. It’s a good way to attract people’s attention. The most beautiful testimony will always be to hear people say, »we saw your movies and we wanted to do the same, and swim in the water«. It’s awesome because it’s exactly what we’re trying to do: Make this universe reachable, and make people want to go out there even if they’re sometimes afraid of it. I try to show them that anybody can do it.

Throughout your films, your devotion to free-diving seems to go beyond the sport itself. Can we talk about an artistic approach?

We can! I have to pay attention to my words as it can easily turn boring – I don’t claim to be an artist! Having spent so much time in the water, I have developed a sixth sense. It’s also had an impact on the way I move underwater, and the way I tackle this environment, which is more developed than the average person. So I just have fun underwater! For me, under the surface is a playground. It’s a way to make my fantasies come true, those fantasies impossible to achieve on earth. Fly, walk as if I were on the moon, challenge all the laws of gravity, these are all things I can only do underwater. The universe allows me not only to dive or swim but it gives me so much more. In my films, when I walk underwater, I try to position myself as a human. For me, it is a way to show people that everybody can do it. It is a way for people to identify more easily. As humans, we keep a lot of adaptations from our aquatic origins, yet they are all within us.

When we watch your latest film »Haven« by Jérôme Espla, your quest goes far beyond the performance. Do you feel you’re more than an athlete today?

Absolutely! A few years ago, my friend and filmmaker Jérôme Espla had already filmed a documentary on The Haven, with a scientific approach. When I first discovered his images, I immediately had the fantasy to stage free-divers taking on the assault of this huge submarine architecture. What interested me with The Haven was its size, it’s huge size. I saw The Haven like a sunken city. The original idea was to use the wreck as a decor which sends us back to this myth of the lost city of Atlantis.

Yes, that’s why in the movie we tried to make the wreck look like something that we could find on earth. We tried to make the viewer forget it was actually a boat. We staged stairs and a terrace where I jump onto. On large plans, we see this mass where nothing is recognizable. We could have created images of the propeller, for example, but we preferred to avoid that. Before going down there, we already had a script to avoid wasting time because on The Haven, it is actually very difficult to film. It’s deep, it’s an exposed zone with very poor visibility, and has currents that make the dive dangerous.

How long did the filming last?

We were lucky to have a 3-day good range, actually 6 half-days, where the conditions were good enough to film. For every dive we had a precise goal. We made 6 dives, and each time we had a gesture to respect. In every dive, we needed to create a consistency, to have logical connections between the dives. It was our biggest challenge. We couldn’t afford any mistakes. A bad dive meant the whole film was compromised. Each half-day, we could dive 3 or 4 times. It was either collective dives or individual free-falls. Our time was limited as Jérôme Espla only allowed us a certain time underwater. In apnea, beyond 40m, there’s a certain amount of dives to respect. We have security intervals and rest periods on the surface to respect. So the challenge was to get a result with a maximum of 4 dives. Without this problem of decompression, we could have had 3 hours-sessions. But in reality we couldn’t!

Do you remember your very first feelings and impressions once down there?

It’s very impressive to swim across a wreck. You feel that you are face to face with a photograph, and this precise moment when the boat leaves the surface, when it becomes static underwater it’s the start of a new story. Once down there, we imagine many scenarios of life on-board.  It’s a strange feeling because, once you’re down there, you realize the power of nature which colonized the wreck with shells, and fish. It’s a setback of mans vanity to think we can build machines more powerful than the ocean. One day, the ocean swallows them up and another cycle of life begins. We have a feeling of humility when we’re down there. With time, the sea will digest it and nothing will remain. That puts us back in our place! 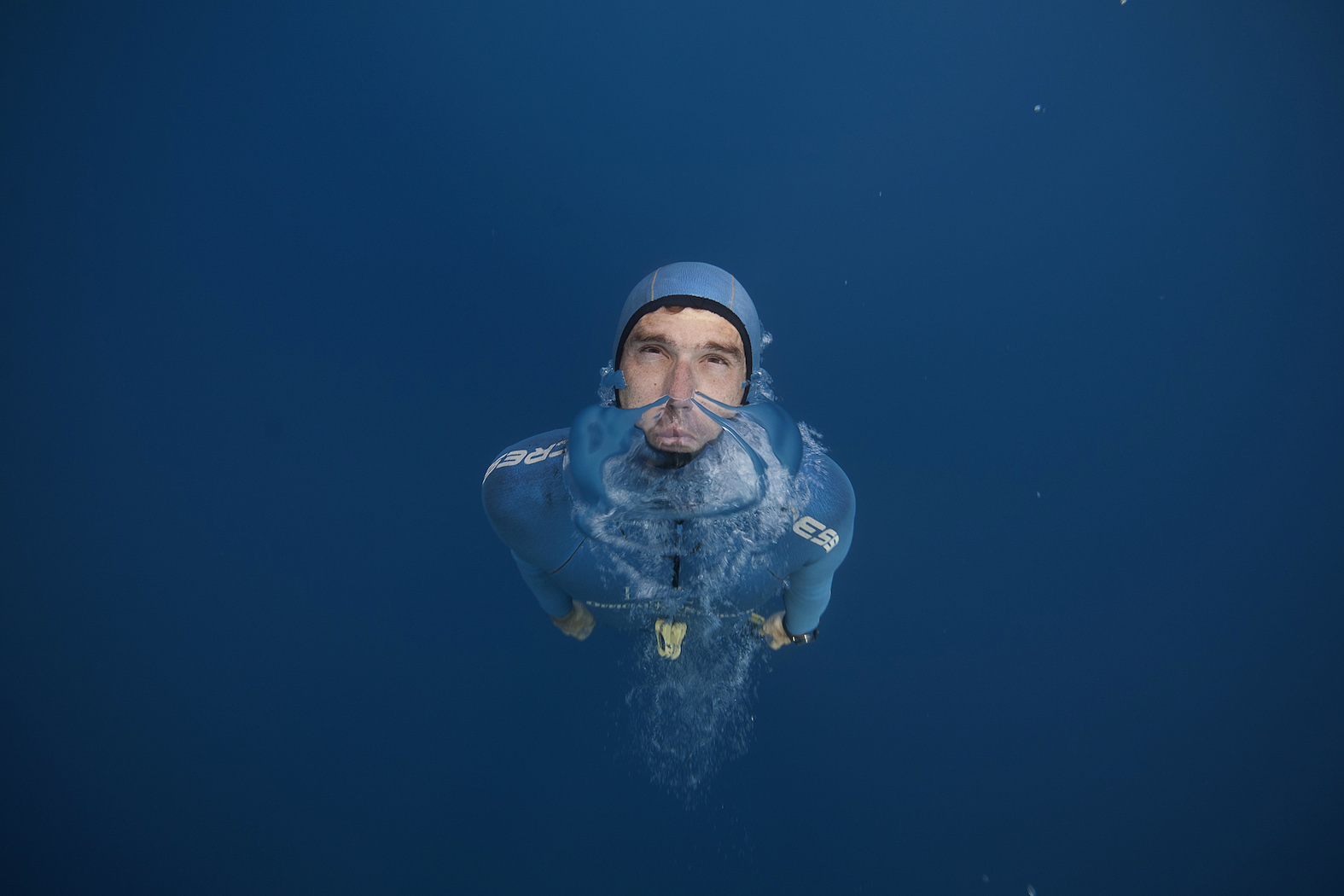 A depth mistake nearly killed you last year during a competition. Does being a professional free-diver mean thinking always about possible dangers and accidents?

Yes, I had this big scare last year  when I dived much deeper than expected. I lost consciousness. As professionals we are constantly aware of the dangers, but most of these dangers are manageable. We only need few things to limit the risks. Rule No 1: Never dive alone. When you respect this very first rule, you are protected from 99% of dangers. The other big rule is, above all, to listen to yourself and do not let your ego get the upper hand. Dive with attention, improve very slowly and never dive to beat records. You must have humility and respect, like when going to the mountains. It allows you to protect yourself even if there’s always a risk. Anything can happen but if you are ready, and have considered all the possible scenarios then you protect yourself.

Did free-diving teach you a better knowledge of your body, and more globally, of yourself?

It did! When I say apnea is a lifestyle, it also means you learn to listen to your body better. Apnea brought me this special and very strong connection with my body. Apnea is a form of meditation, a form of one-on-one with yourself. In everyday life, we’re rarely one-on-one with ourselves. Nowadays, we’re more and more immersed with all these technologies. We are completely disconnected. I’m starting my second book right now and that’s a bit of the subject of the book. I talk about this connection, disconnection and re-connection. I had the chance to reconnect thanks to apnea and free-diving, but it’s possible to reconnect to nature thanks to many things. We often say we live in a very connected world, but our world creates disconnected societies. Virtually, we have never been so connected but in reality, people are completely disconnected from one another. Urban modern man is totally disconnected from nature. We have the feeling that people want to reconnect with nature and free-diving is one of the ways we can do this.

As a multiple world record-holder, you also became individual world champion. Do you still have goals and dreams?

There’s this book I’m working on. Then, I have the project of making a bigger film, trying to bring together this identity we’ve managed to create along the years throughout short format films. I’ve been working on it now for quite a while, and I think I just started to find a good angle. It requires a lot of writing so I co-write it with a friend of mine who works as a director. The film will be out in 2 or 3 years! Then, I want to keep on communicating what I’ve learnt so far, through courses and conferences.