We use the magic given by the water movement and try to forget about it. 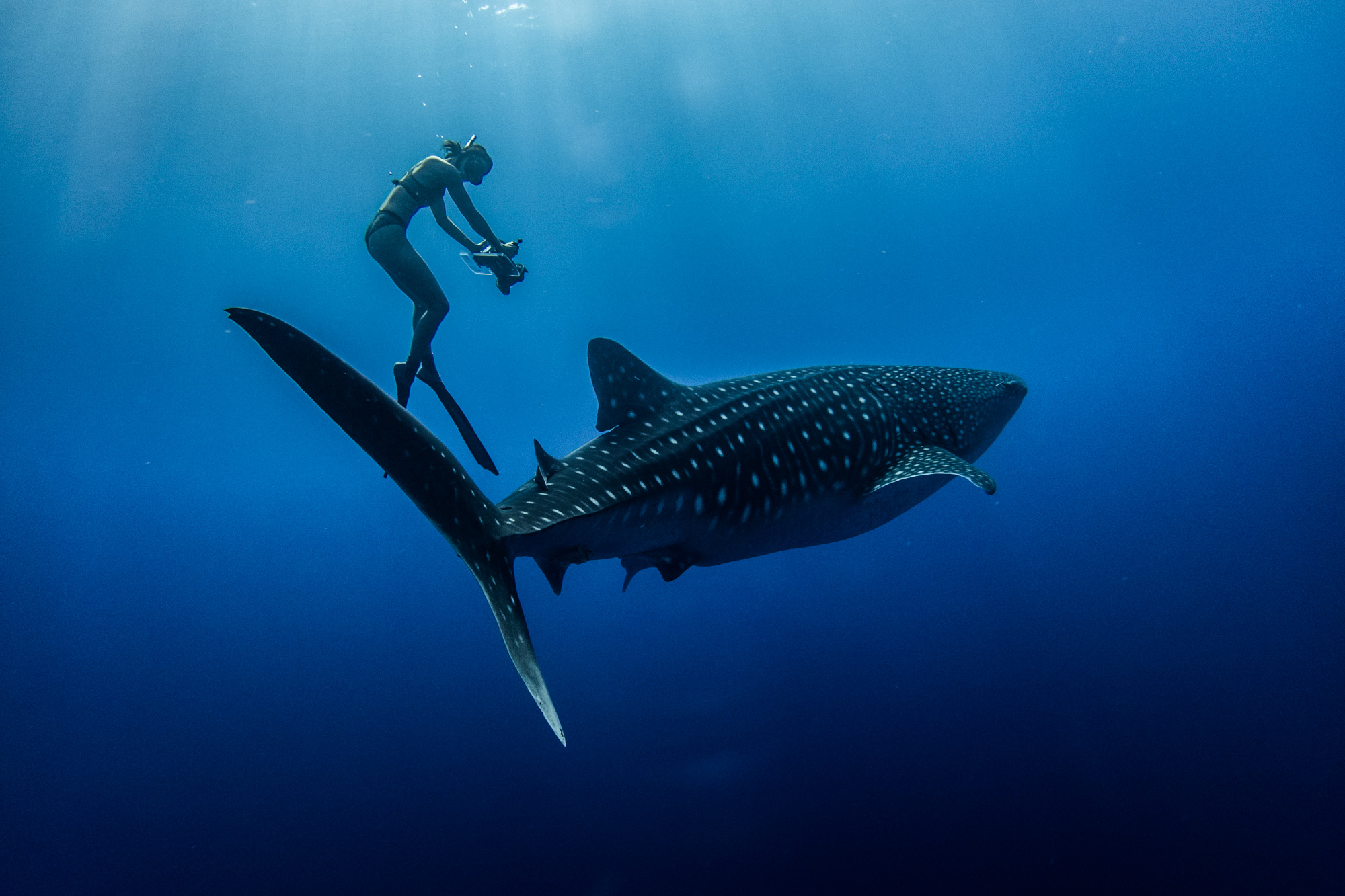 Julie Gautier redefines the rules of the underwater world, immersing us into an unknown universe of endless shades of blue. Her love for the ocean and innate use of poetry has created fascinating short films such as Free Fall, Ocean Gravity, Narcose. Over the years, Julie has collaborated with her husband, famous free-diver champion, Guillaume Néry, under the label Les Films Engloustis. As big fans we are very honoured to have met the French underwater director. Here we learn more about spearfishing, freediving, travels, the importance of instinct and creativity, and what makes her feel alive.

Throughout your films, you tend to make people forget about the water element, don’t you?

Exactly! We want you to see man as if he was born in this natural environment using the magic of water movement to try and forget about it. We’re not here to prove anything, our films are definitely not documentaries. On the contrary, we want to show a dreamlike movie while using the water element to keep inspiring us.

You were born on Reunion Island. Does it affect your work?

My connection with Reunion Island naturally drew me towards water. I grew up surrounded by water, walking on the beach, swimming in the Indian Ocean. My father was a spear fisher who taught me how to fish when I was 11. I consider spearfishing as an art de vivre, it runs in my blood. Since childhood I have had a close relationship with water.

Spear fishing, and then free diving?

Yes, I started free diving when I was 18. I realised it was a unique discipline so started to compete, winning records in deep water free diving. When I met Guillaume Néry, my husband, I started competing again, but I never really felt fulfilled with free diving. I used to free dive solely to catch fish and discover the underwater world. I didn’t consider free diving as an entity of its’ own. So to find myself going down along a cable, and having to dive on a specific day, following specific conditions was hard for me. To me, freediving is more about being in synch with our emotions and feelings, and diving whenever you want to. When we filmed “Free Fall” with Guillaume I suddenly realized I could use this talent of moving and staying long in the water to be more creative. There was no question about performance anymore. That day, I just told myself “Voilà! That’s why I dive underwater.” I finally found my way.

So you mainly shot your films freediving?

Yes, however for some film projects likes “Narcose” or the “Beyoncé Project”, I worked with an underwater filmmaker who scuba dives to capture fixed sequences. “Free Fall” and “Ocean Gravity” were shot entirely freediving. To be honest, it’s easier in terms of organization and communication with the other free divers. Between each take, we can talk and improvise. It becomes a very natural process whereas when I scuba dive, I need to prepare everything in advance. There’s less space for interpretation. 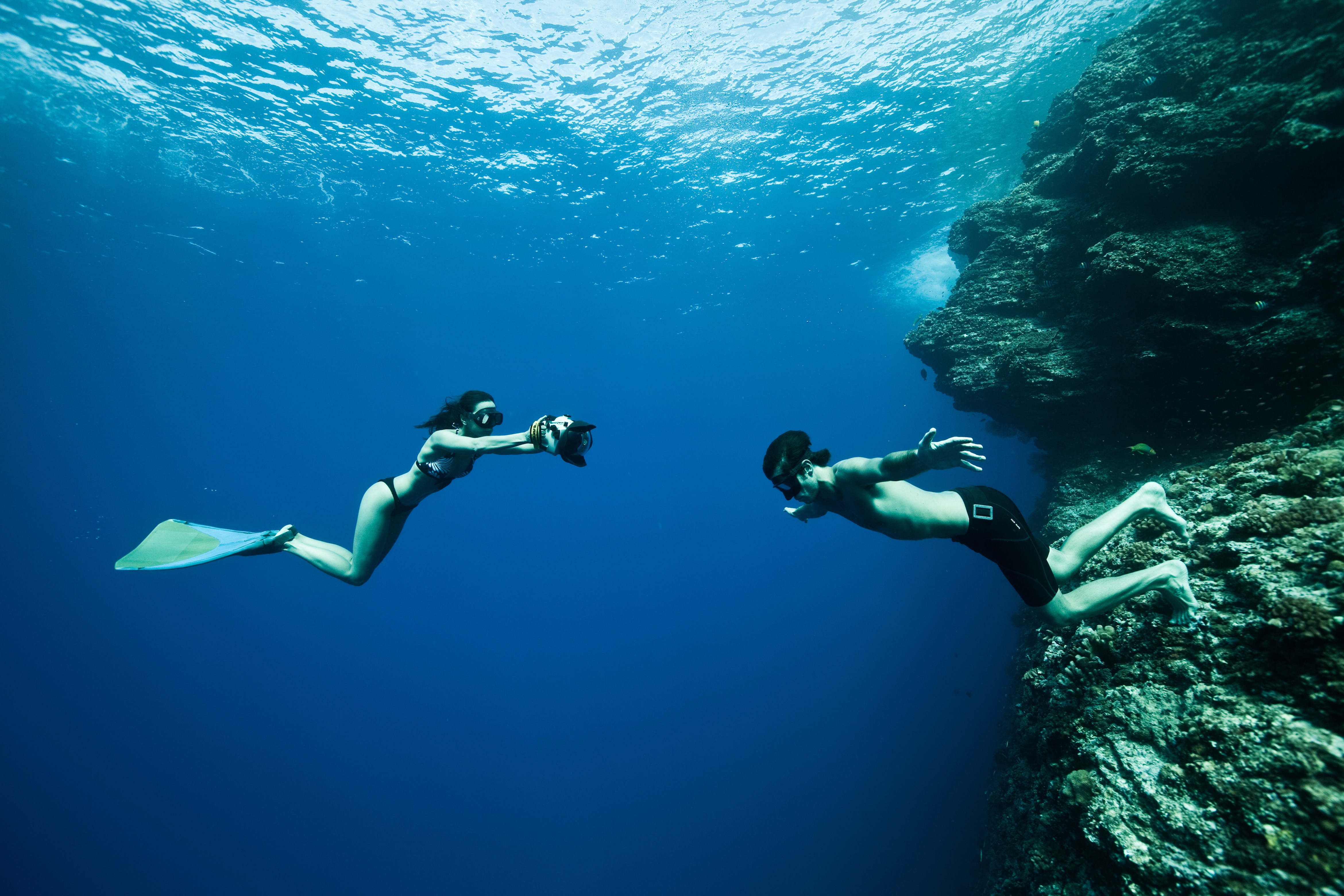 We’re quite complementary with Guillaume. “Free Fall” & “Ocean Gravity” are his projects. He was the director and allowed me to shoot with my own passion. He works more instinctively than I do. “Free Fall” was a real coincidence as Guillaume was in competition. Until then I’d never held a camera in my whole life. So the first idea was pretty simple. Guillaume loves doing these free falls and fly underwater. We were in the Bahamas at the time, diving in this big blue hole, and Guillaume asked me to capture him while he was descending. It felt so natural! Projects like “Narcose”, the “Beyoncé Project” or my latest short film “Ama” are projects that I’ve written. I created them the way I wanted. In some way, I feel I’m more an author than a director. I enjoy the writing, I like to create storyboards and know exactly in advance every single shot. So I have two approaches.

You’re inspired by directors like David Lynch, Christopher Nolan and Xavier Dolan. Are you influenced by their poetic universe?

I think I’m influenced by everything I see. I don’t analyze David Lynch or Terrence Malick’s movies but when I watch their films, I am truly touched. I feast on what I see and allow myself to be carried along by my feelings, ideas and travels. There’s no obligation, we can spend 3 years without making a movie. I am inspired by the places I discover, and when an idea appears, we create something.

Talking about poetry, tell us more about your latest short film “Ama”…

I had been thinking about “Ama” for 8 years. I was working with an artist, travelling the world and dancing in the water with the most incredible marine animals, and it made me want to dance again. I hadn’t danced for 15 years before that, but I wanted to work on a specific choreography on the ground. The first idea was to bring the dance movement into water. A dance video asks for a specific thematic, so I needed a story to tell. That story only came to me following a very difficult family event 3 years ago. Holding this deep within me, I wanted to offer my pain to this film. I wanted to illustrate this grief, and the strength that we have to overcome a crisis through gestures, and body language that worked better in the water. We worked on choreography in order to respect the thematic that I wanted to express. Again, I wanted to forget about the water element, get out of the underwater context, and remain in the very precise dance movement. The water element helps get magic jumps in weightlessness. Most women appreciate “Ama” because it is a movie made by a woman, for a woman’s pain.

It’s a wonderful film. We absolutely loved it. Tell us more about another stunning project called One Breath Around the World?

It’s Guillaume’s initiative, but we’ve been working on it together. We wanted to capture all the beautiful places we’ve discovered together, and all the places we dream of in one film. Initially, we didn’t know what story to tell and needed to find a common thread so it took us some time to figure it out. We came up with something really raw, really simple. Our first trip led us to Mauritius to meet the sperm whales. We went to the Philippines to meet the Badjaos people - the very first fishermen with amazing fishing techniques. They have a strong bond with water, the purest we can have. We’re only consumers of the sea, but the Badjaos live with it. Diving with them brought us back to the basics of what it is to be connected to water. We went on to Mexico, and Japan, a place where Guillaume had always dreamed of visiting. And we just came back from Finland where we free-dived under the ice. It was exceptional. We’ll be back to French Polynesia in October to capture more shots of sharks and whales. 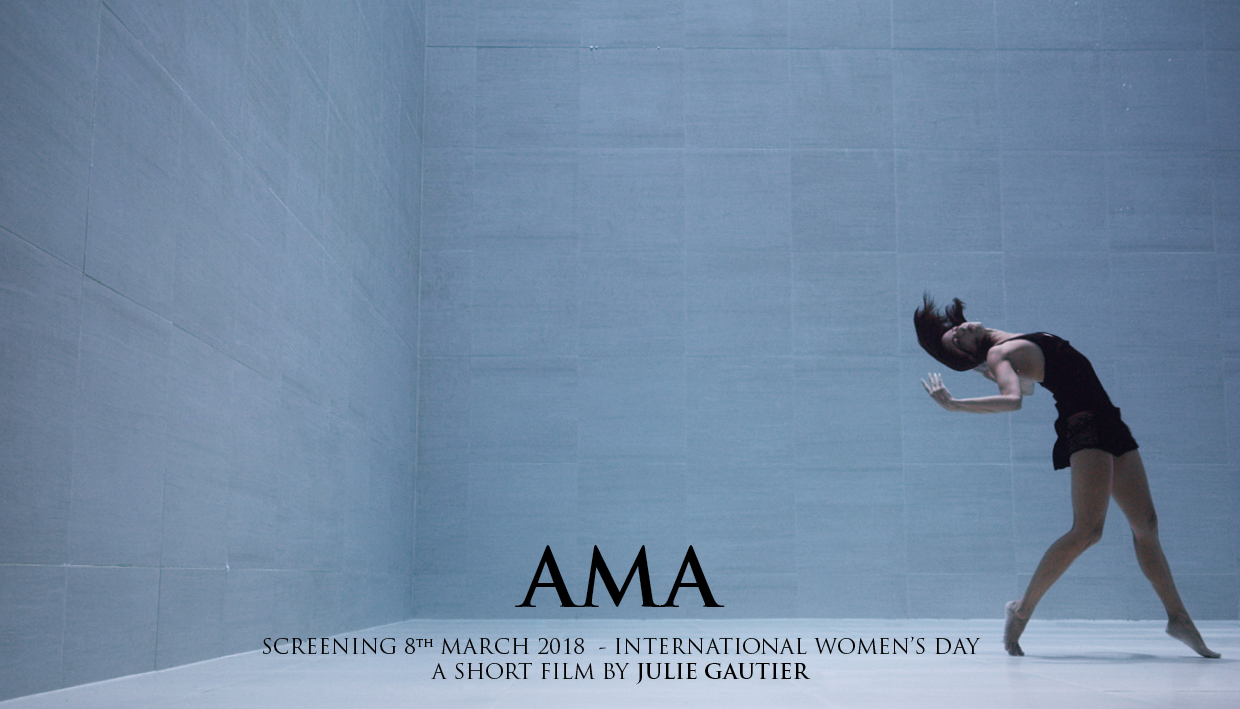 You mentioned your creative and art process, do you see your role as spreading a message about ocean conservation?

Absolutely! When we first started to film images, we were motivated solely by aesthetics. We wanted to show our feelings for freediving in images. There was no hidden message in favour of environmental protection. But over the years, we slowly realized that our films enlightened the public about both a lifestyle and a certain respect for nature and the sea. People said, “We saw your films,and it changed our vision of life. We left the tumultuous city life to become a diving instructor and be closer to nature and water”. Today we want to collaborate with foundations and be part of a movement for ocean conversation. We are going to have a more environment-friendly discourse. My next project will focus on the collective awareness of plastic and the consequences of marine pollution.

What’s next for you?

I’d like to shoot the plastic project next year and create an ecological fable. I have started to write the script. I’m collaborating with Forlane 6 Studio, a Greece-based couple who create structures with plastic trash and make underwater art pieces. As filmmakers, we usually work with natural settings, and don’t often have proper decor, so when I discovered their work, I wanted to join them. I’m also working on a project inspired by “Les Fables Nautiques” from Marine Blandin. I’m a huge fan of comics, and fell in love with her work. So I’m planning an adaptation of her comics in film. 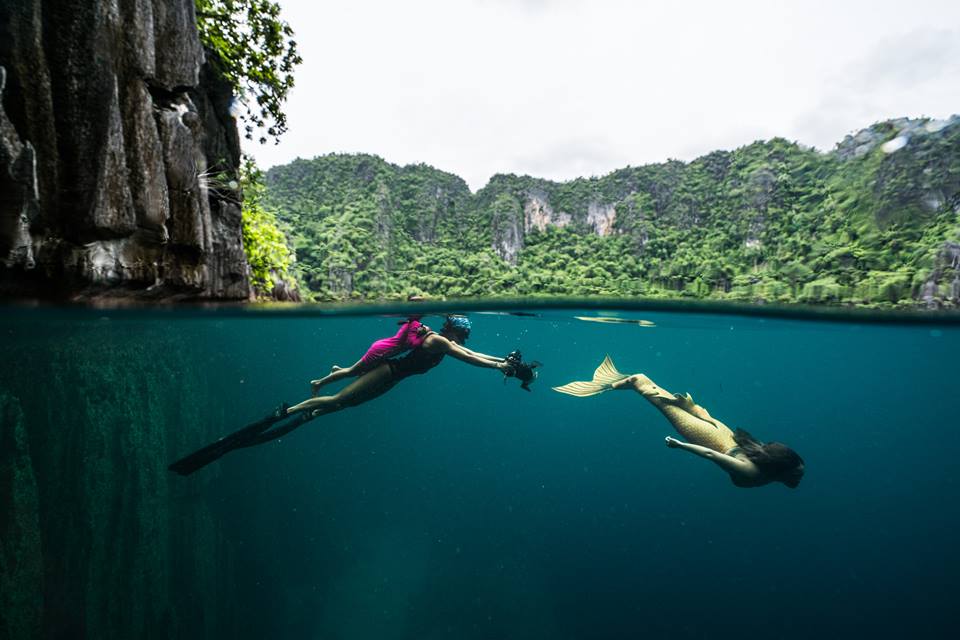 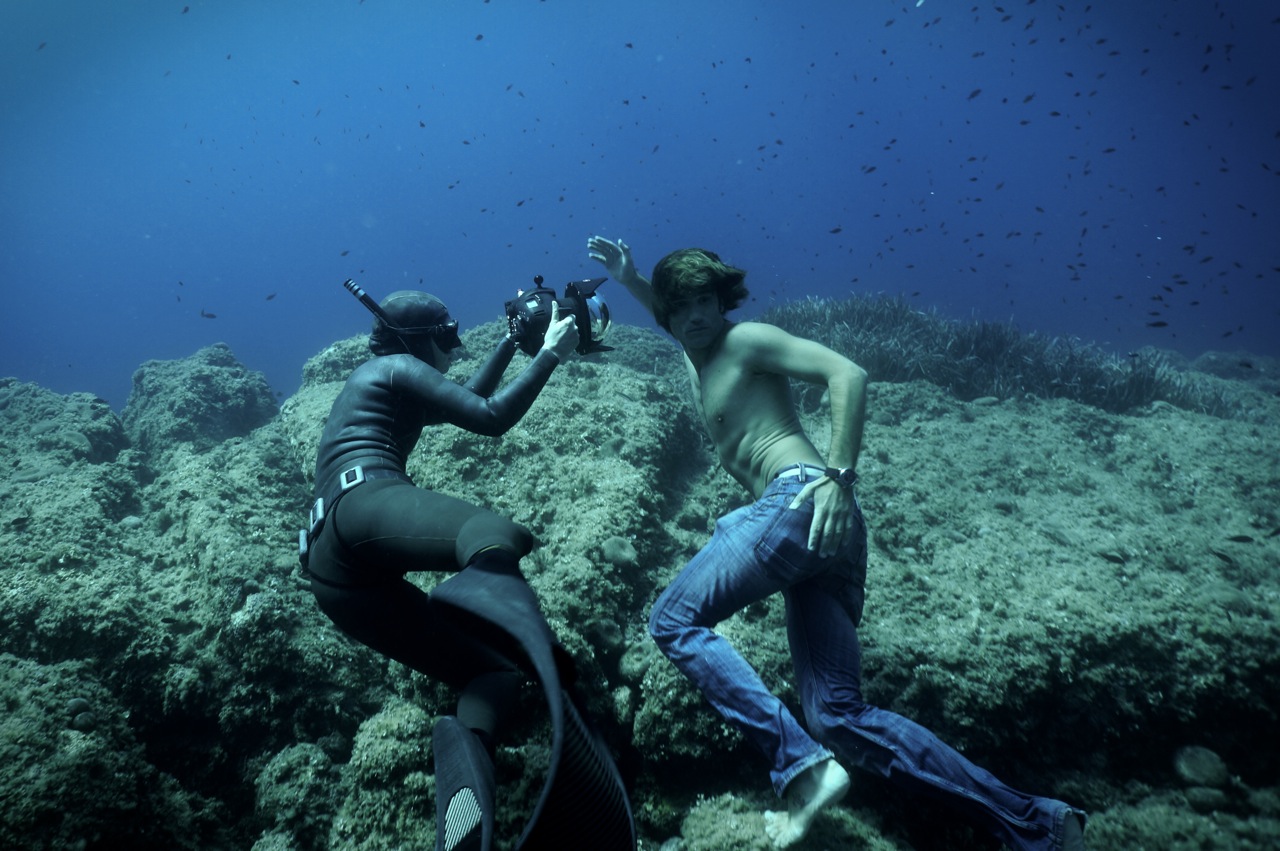 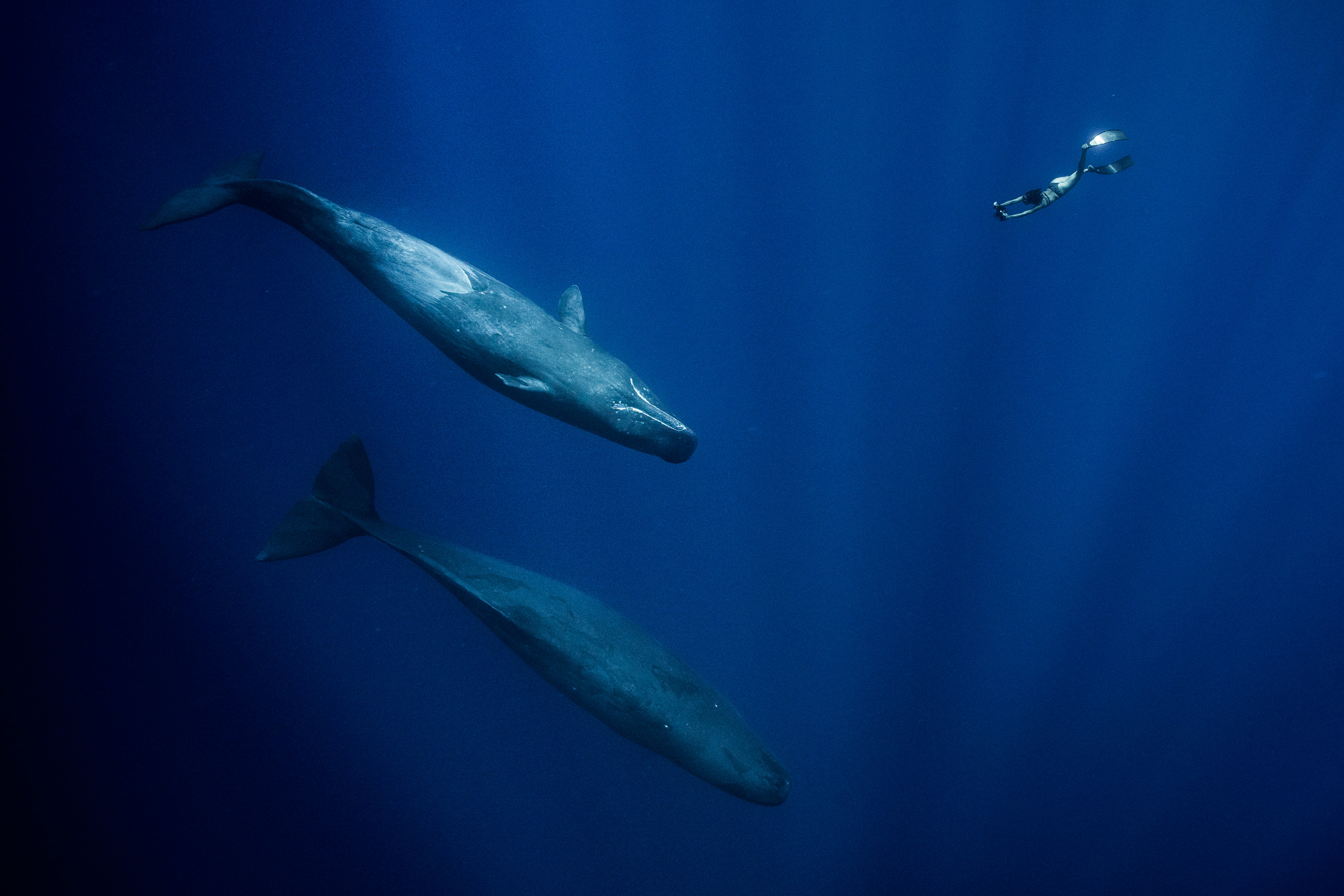