The sea can be a place of hope and dreams but also of despair and death.  Oscar-nominated director Skye Fitzgerald has created this powerful nine minute documentary for Sea-Watch about the dangerous plight facing refugees  attempting to cross the Mediterranean.

At least six people still die every day fleeing across the Mediterranean. In 2018 alone, at least 2,277 people attempting to cross the sea were unable to reach dry land. As the work of civil sea rescue organisations is hampered, the proportion of deaths and missing persons in the Mediterranean has quadrupled since 2015. Alarmingly, 85 per cent of Germans are not even aware of the extent of this crisis, according to a YouGov survey commissioned by Sea-Watch.

Michael Schwickart of Sea-Watch explains: »When we started civil sea rescue in 2015, the mood in Germany was different. A few years later, the willingness to help and support has faded. But even in 2019, the Mediterranean remains the deadliest border in the world.” 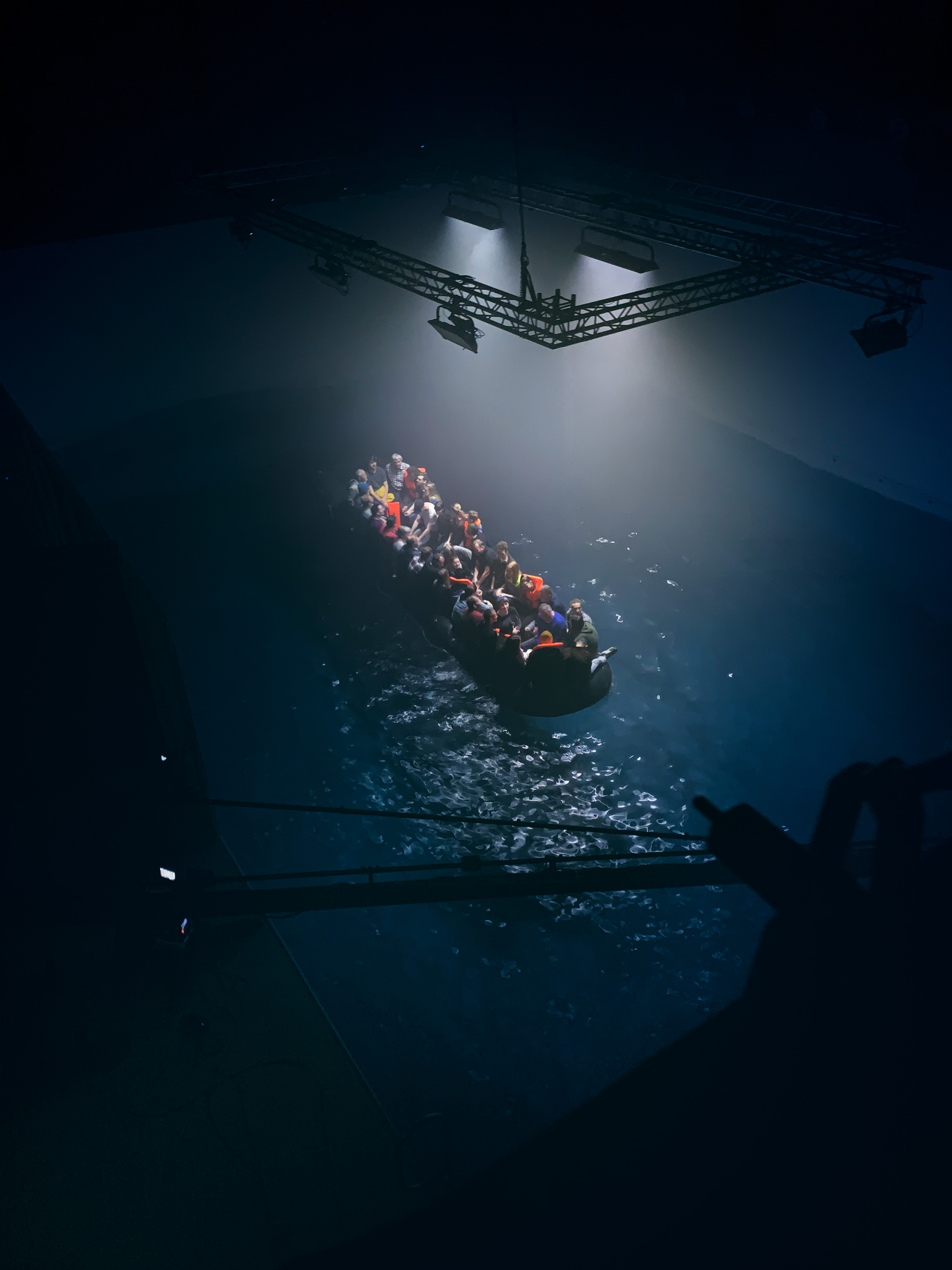 Called Lifeboat – The Experiment, the film allowed 40 volunteers to experience a simulated Mediterranean crossing in a rubber dinghy, which was developed together with five refugees who had survived Mediterranean sea crossings and  told of their experiences and impressions. Based on the first hand accounts of these traumatic experiences, the simulation was designed to be as realistic as possible.

The result is a a film that caused the participants to re-evaluate their views of immigrants attempting dangerous sea crossings.

Experimental setup: On the basis of the experience reports of people who had fled, we set up a test set-up in a maritime training facility. In the centre of the setup: a 4-me- tre deep, 15-metre wide and 23-metre long basin with the option to simulate waves realistically. In order to offer all test persons the most abstract environment possible, a 3 metre high privacy screen was installed. The resulting projection surface was used to simulate the different times of day with different lighting conditions. A surround sound system was used to sound the test persons with sounds and noises close to the situation in order to reinforce the impression of the open sea, storm and swell.
The lighting system was also able to simulate storms with lightning. The 9 meter long in- flatable boat was fixed in the middle of the pool by divers. Artificial fog made it difficult for the test persons to see the edge of the pool. All efforts were aimed at a realistic simulation of the open sea. 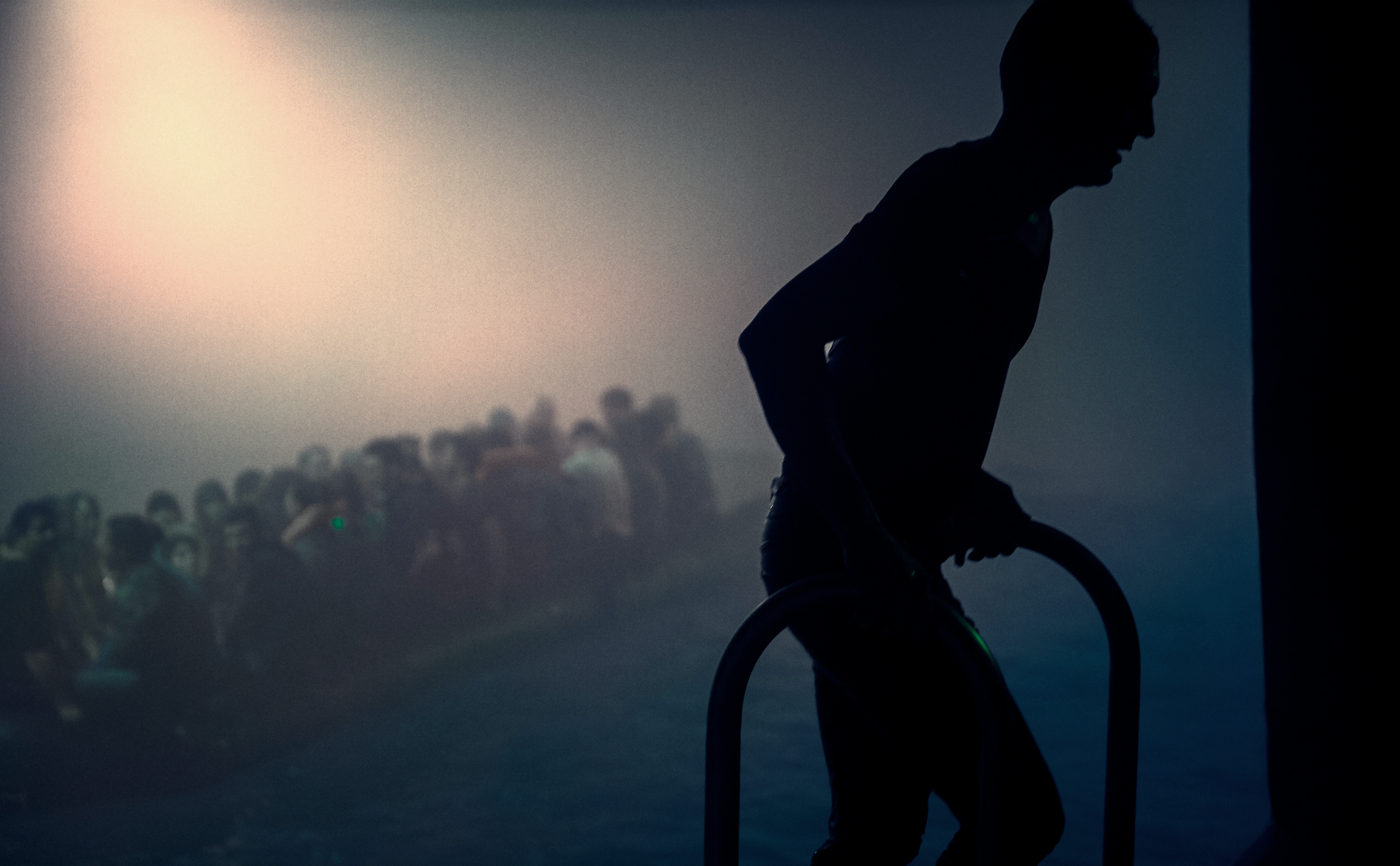 The volunteers have only undergone a fraction of the actual strain that refugees in the Mediterranean are subjected to. Even if reality can never be simulated, simply because uncertainty and danger cannot be simulated under controlled conditions, the documentary experimental set-up is intended to give both the test subjects and the viewer a better idea of the unworthy conditions for which Europe is responsible at its external borders by closing safe passageways for people on the run and thus forcing them onto those very boats.

Through the massive change of perspective, the medical-psychological care and the impressions of all participants, as well as the confrontation with the narratives of real experienced situations of fugitives, we want to create a new approach to a debate. The central question is: how can it be that the nationality of people in distress at Europe’s borders makes the difference between rescue or death?

The support for this cause is still quite limited and the topic has not been at the centre of the news cycle recently. With Lifeboat – The Experiment, Sea-Watch intentionally chose a different way of creating attention and reigniting the conversation around the lives lost at sea on a daily basis.”

To find out more please do visit www.lifeboatexperiment.org