For my project L’envol obscur, I transformed the original shapes of plants to be able to speak about the ocean and pollution. 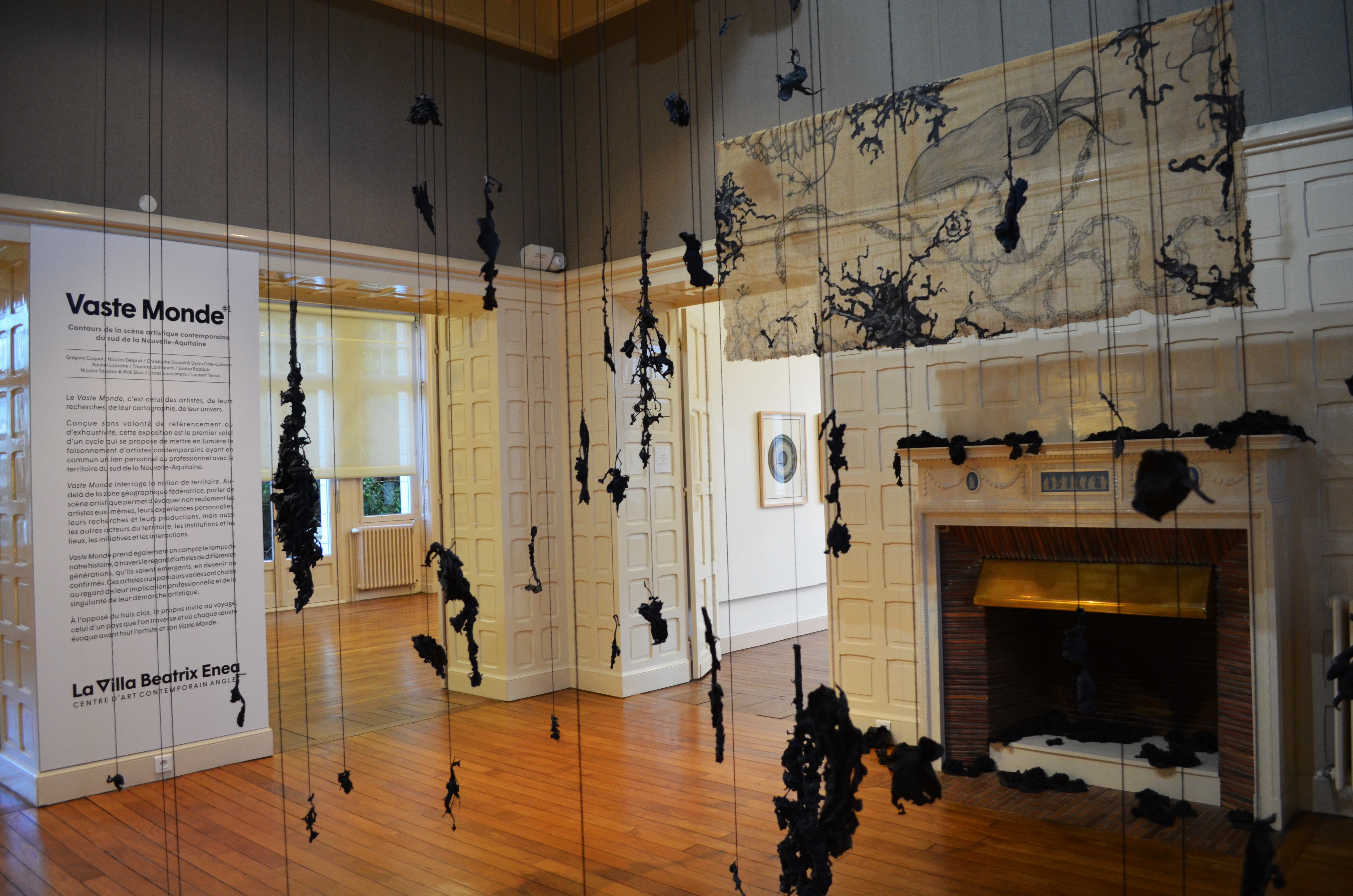 Based in the South-West of France since 2004, French-German artist visual artist Louisa Raddatz's work is predominantly based on memory: "My personal and individual memories, as well as my family story through which I want to distinguish myself from history," she says. "Another important feature of my work is about creating imaginary landscapes based on organic materials as aim to sensitize people of environmental protection - pollution, endangered species - and ecology."

Inspired by nature, halfway between autobiography and fiction, Louisa uses different surprising natural materials such as hair, horse hair, clay, sheep whole and latex. "Latex is an interesting ephemeral material because by time and a long process, latex is getting blacker and blacker", she explains. For her 2016-Dark flight project, the France-based committed artist shaped plants "trapped and engulfed by latex as marine animals affected by these disasters" in order to reveal the impacts of oil spills on marine ecology.

On the occasion of her art installation "Atlas" part of the global "Vaste Monde" exhibition in Anglet (France) at the Villa Beatrix, we had a chat with the artist. Let's meet. 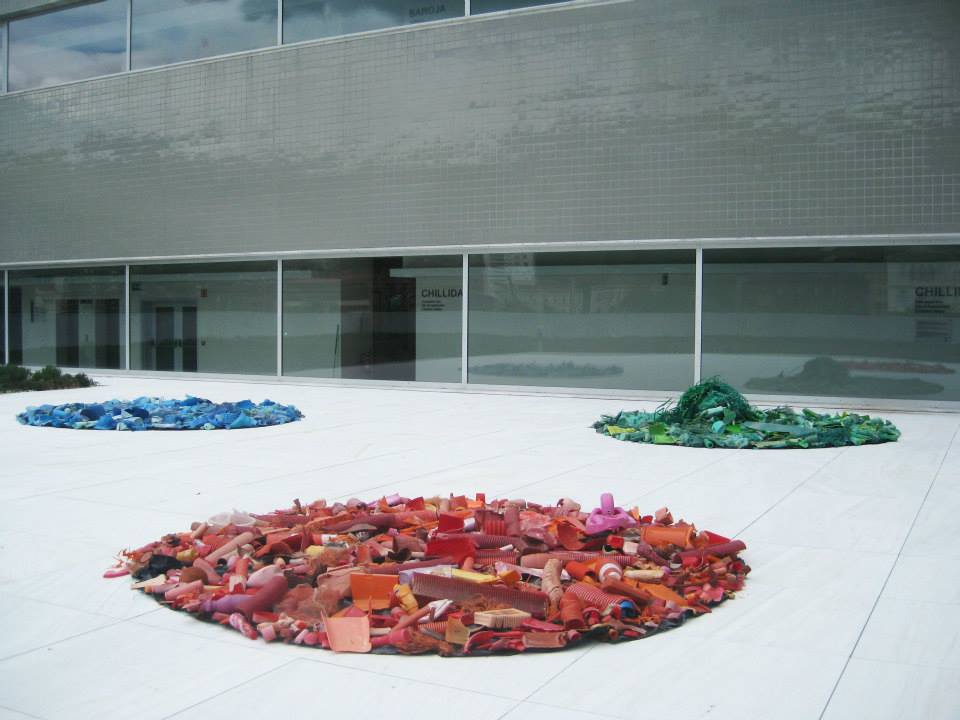 Hi Louisa, how did you get introduced to art?

I always knew that I wanted to do something creative, like being an artist. How I played as a child was already different and imaginative. For example when I was six, I created an animal cemetery with my best friend and I had already created graves for my future pets that I never had until now. I didn’t realize it but it was already important for me to work around memories and learn to preserve them. My passion for art has his origins rooted in a family’s cultural inheritance. My father loved collecting things. He was passionate about space and he collected everything he could find in newspapers. I created an installation entitled « Raumzeit – Welt t traum » about his collection and I was brought to interrogate his personal story (through photos of my father) and his history (Cold War). My story works hands in hands with my family's, so it’s about my own identity as well as my human identity.

Born in Germany, raised in France, what did you dream of as a kid?

I’ve always been a dreamer but with time, every adult loses some part of magic and innocence. When I was a little child I dreamt of becoming an art teacher or working with pottery. I ended becoming an artist and I have already worked with clay, especially with my "Vestiges" (Remains) piece that questions the destruction of coral reefs. Today when I create, I feel like a child who is playing, and I’m returning a bit back to my childhood.

Where do you draw your inspiration from?

When I was a student, I kept a personal diary where I drew one drawing every day, including the date of the day. So by doing so, I could liberate instinctively my feelings and emotions in an obsessional and abstract way.  For a long time, I didn’t see my drawings as an artwork but only as simple sketches and a research tool linked to my imaginary.  I never shared these drawings to anyone. Working with organic materials, I felt these drawings weren't enough "alive" for me. In 2016, a series of drawings named "Métamorphoses" was born. This set of drawings was finally animated and lively, constantly in transformation, changing, and moving as a "flipbook". One drawing followed by another one, reproducing a same shape and adding new elements on it. In this way I created an evolution over time.  My goal was to offer infinity to this piece as well as to my work, more globally. Transformation over time lets us think of the artist Roman Opalka who, for decades, has been writing numbers on the walls of a room every day. At first the wall was all white. Today, despite the ink of the writing, the wall is becoming more and more black. I was also inspired by the works of Michel Blazy, which are sentenced to decompose, transform over time in order to reach the eternity of existence.

"Métamorphoses" is actually a set of more than a hundred of drawings, always in progress, unfinished… Step by step, new shapes arise, evoking living systems like the animal world and the plant world. Many of my drawings are inspired by the underwater world. That's out some strange jellyfishes appeared on my paper. As a result of these drawings, I created a piece called “Méduses cailloux" (Pebble jellyfish) in 2018 (see pictures). This work is a reference to the only living species in this world called "turritopsis dohrnii". Turritopsis dohrnii, is officially known as the only immortal creature that can live forever. The secret to eternal life, as it turns out, is not just living a really, really long time. It's all about maturity, or rather, the lack of it. The immortal jellyfish propagates and then, faced with the normal career path of dying, they opt instead to revert to a sexually immature stage. So they don’t die but transforms back into their juvenile polyp state. "Méduses cailloux" are special jellyfishes that have some pearls on their filaments, it can remember mermaid’s tears-plastic pellets. You can find a lot on the beach of Les Landes in France. 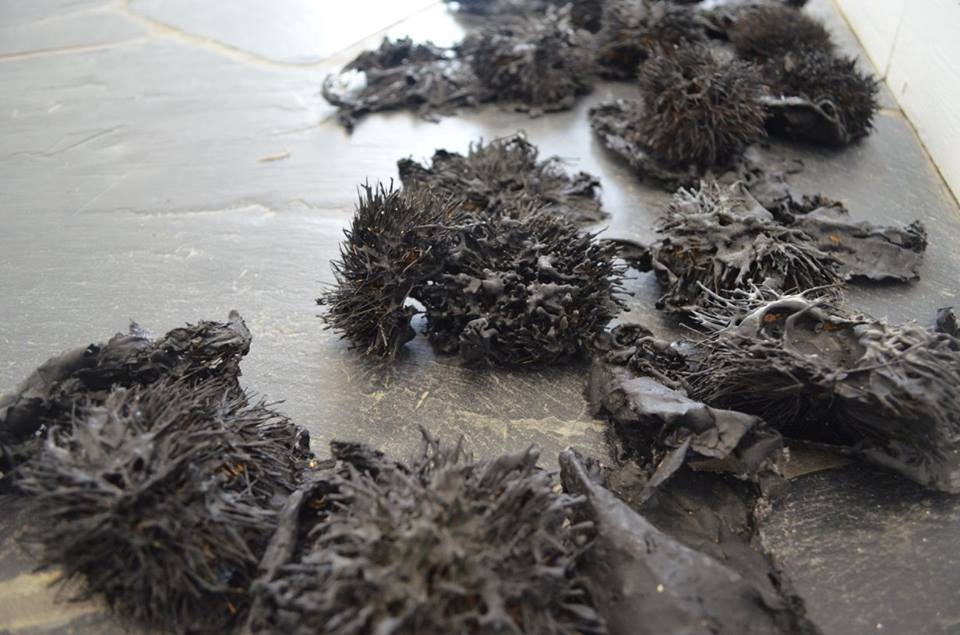 Tell us more about this "obsessive family archaeology"? Why intimacy, relationships and family are such important subjects?

My personal story is not an ordinary story. The family is union, you are linked by blood. My grandparents are gone. When my last grandfather died, it was the end of a big generation and I created "Marche Blanche", a homage to all the people who unfortunately left us. This work can make us think about the work of Christian Boltanski. I didn’t really know my grandparents. Two of my sisters are touring the United States by bicycle since 2008. They will probably never come back. I didn’t see them since 2008. I realized a photo album entitled "Sisters" and an installation entitled "Sisters on the road" as an attempt to remain connected. These creations are called "atlas" in reference to the work "the Mynomsyne atlas" made by art historian Aby Warburg (1866-1929); a puzzle of "constellations" that created a family inheritance from his intimate space, documents and archives forming a collection.

Your body of work tends to question not only texture but also space and time. The notion of "past" is also an important topic. Tell us more about the importance of the past in your process of creation.

I’m attempting to reconstruct things from the past by fragments of memories. I present an accumulated quantity of memorabilia. It’s my starting point. Keeping it allows mine to return back to the past to be finally able to preserve it for maybe... eternity? In doing so, I rely on tracks, archives and documents. In order to not forget or "lose memory" of the past, I attempt to resuscitate the past by the means of accumulation. I’m connecting the present with the past. In my work, I interrogate material, space and time (past and present). In order to capture the uncatchable, time and space, I use my artworks as my passageway into the past. I create art that has at its core "survival".

What kind of mediums do you use? Tell us more about your stunning art installation "Atlas" part of the global "Vaste Monde" exhibition in Anglet (France) at the Villa Beatrix.

I’m using a lot of different mediums. I have already worked with hair, horse hair, sheep whole, and clay, latex as well. When I’m creating installations with organic materials, it is hard for me to stop, I want to do more and more, in an obsessional way (accumulation) because my pieces are like growing things. I’m always working with the same process starting and resting on a “ritual” based on sorting, ranking, assembling, adding, accumulating, invading, repeating, unifying and finally, living. At the Villa Beatrix in Anglet for an exhibition, I presented two of my works: One entitled "L’envol obscur" (Dark flight) and the other one "Sans titre" (Untitled). "L’envol obscur" was created out of plants (vegetal from the forest) and latex. I transformed the original shapes of plants in something different to be able to speak about the ocean and pollution.

Looking at the art installation, we can guess a reference to the issue of oil spills. Is it?

Exactly. "L’envol obscur" (Dark flight) is about oil spills and oil disaster. When I was younger, I saw a lot of oil spills on TV. In my souvenirs, I  remember harmed and killed seabirds in great numbers, destroyed by oil floats. I’m a vegetarian and this has had a big impact on me. For "Dark flight" in 2016 I worked with different plants from the forest and latex. Latex is an interesting ephemeral material because by time, long process, latex is getting blacker and blacker. I added some black acrylic painting into the latex. Here these plants are trapped and engulfed by latex as marine animals affected by these oil floats disasters. It’s all about the impact of oil spills on marine ecology. The ocean is getting more and more polluted today. Nature lost its original beauty. My approach is to talk about pollution in a very aesthetic, poetic and fairy way. A kind of imaginary landscape which lets us dream and question ourselves.

You’ve also been using plastic trash and remains trying to give them a new life. Tell us about this amazing art project.

This project entitled "RVB" (Rouge/Red/Vert/Green/Bleu/blue) was created in 2010. It represents three monumental trash islands in primary colors. For the green one, I have created an outfit of trash so I can animate the trash with my body by doing performances as I did in Bilbao, Spain. The idea is that all the trash gives a new life to a new creature. I was inspired by the seventh continent that is a third of the size of the United States and consists of an accumulation of plastic waste in the oceans. It would cover an area larger than France - nearly 640.000 km2.

In 1997, the American oceanographer Charles Moore discovered the first vortex of waste in the sea: an area of 3.4 million square kilometers contaminated by floating plastic waste, accumulating in the North Pacific gyre, a giant swirling mass of water formed by the ocean currents. Similar pollution can be observed in other gyres in the Atlantic and Indian Oceans. Recently a whale has been found dead with six kilos of plastic in his stomach. My work "Vestiges" (Remains) represents damaged white reef corals realized with clay. Coral reefs are increasingly threatened by coral whitening, caused by the death of unicellular algae that live in symbiosis with coral, resulting in coral death. Coral reefs have survived tens of thousands of year of natural change, but many of them may not able to survive the havoc brought by humankind.

What are your up and coming projects?

Actually, the exhibition "Vaste Monde" is always open for visiting until 9th of March 2019 at Villa Beatrix, Centre d’art contemporain Anglet, France. I invite you to discover "Dark flight". I will participate in a festival "La magie dans tous ses états" organized by a local association in Jonzac, France. I will show one work at Cloitre des Carmes in Jonzac  from the 10 to the 29th of February. I also have some upcoming projects like another artist residency in Charente Maritime, France. 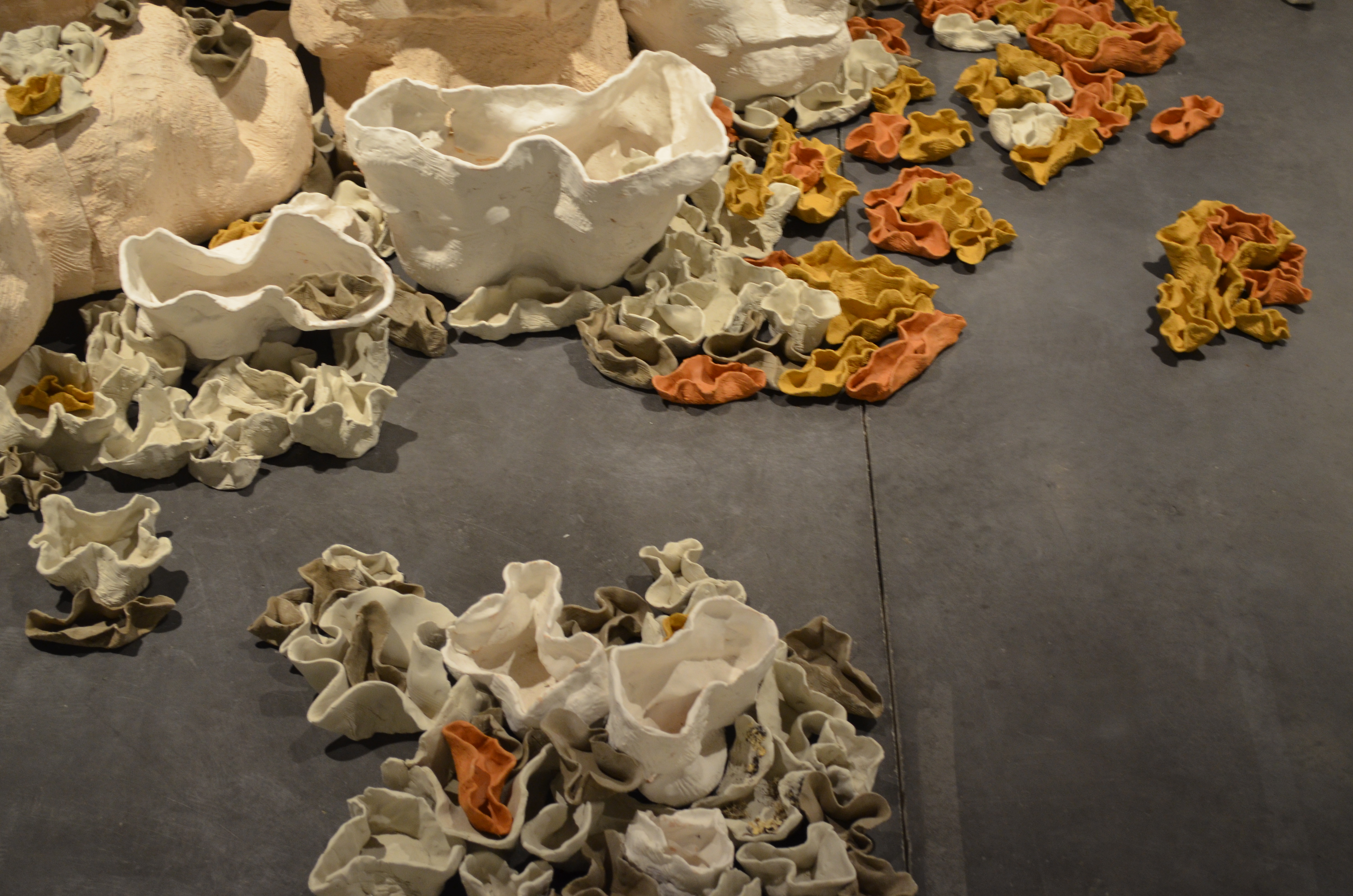 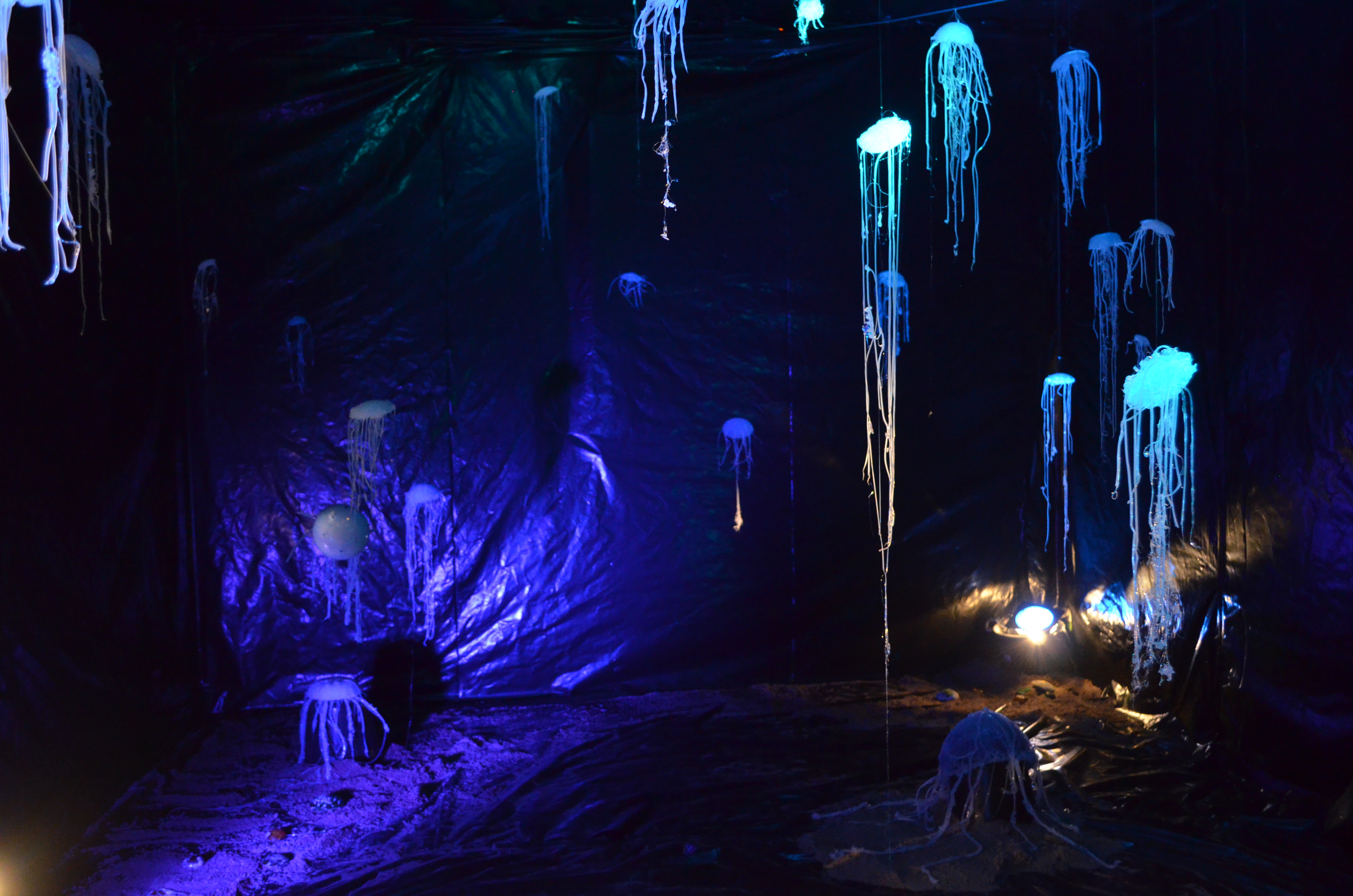 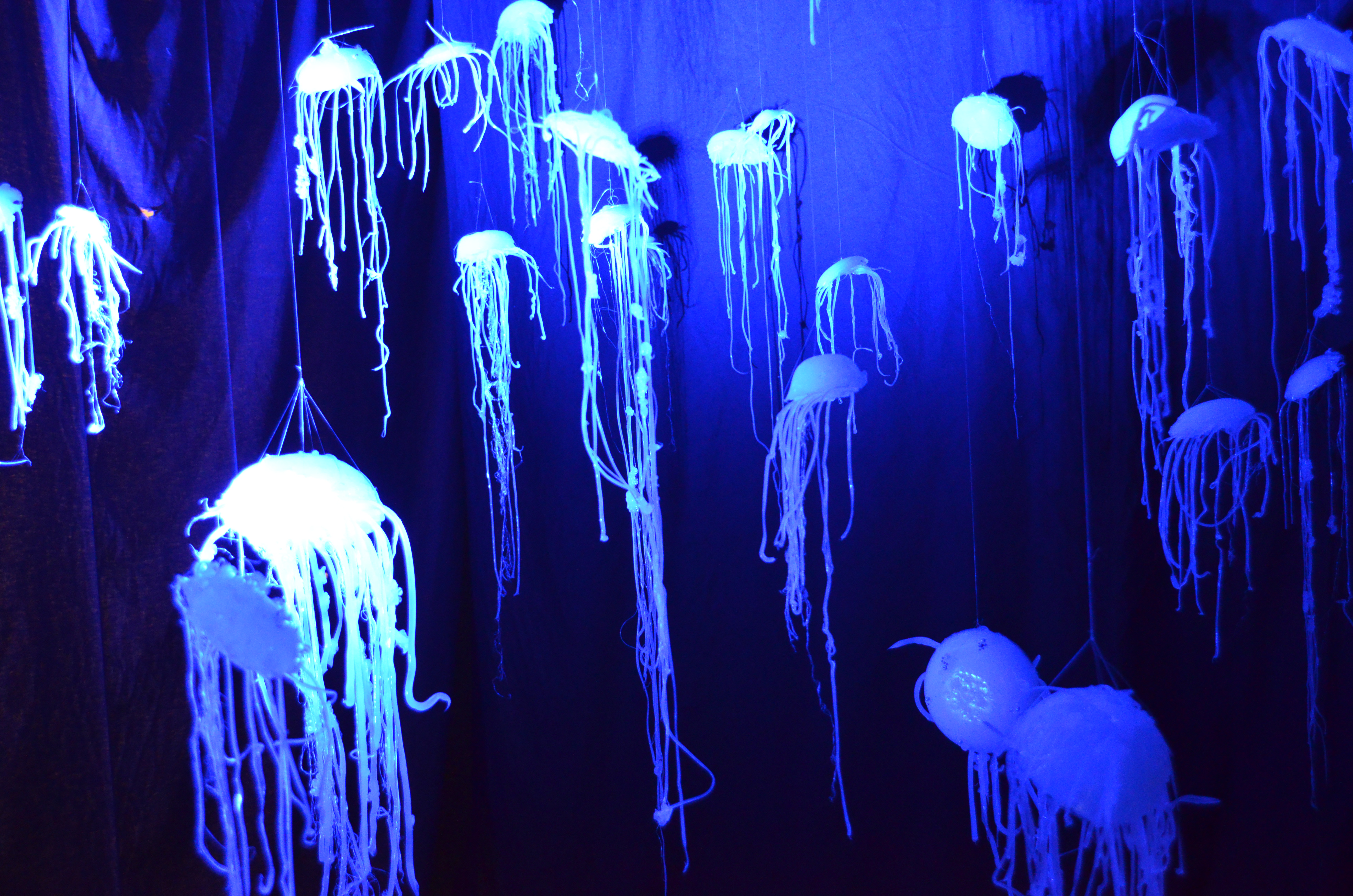 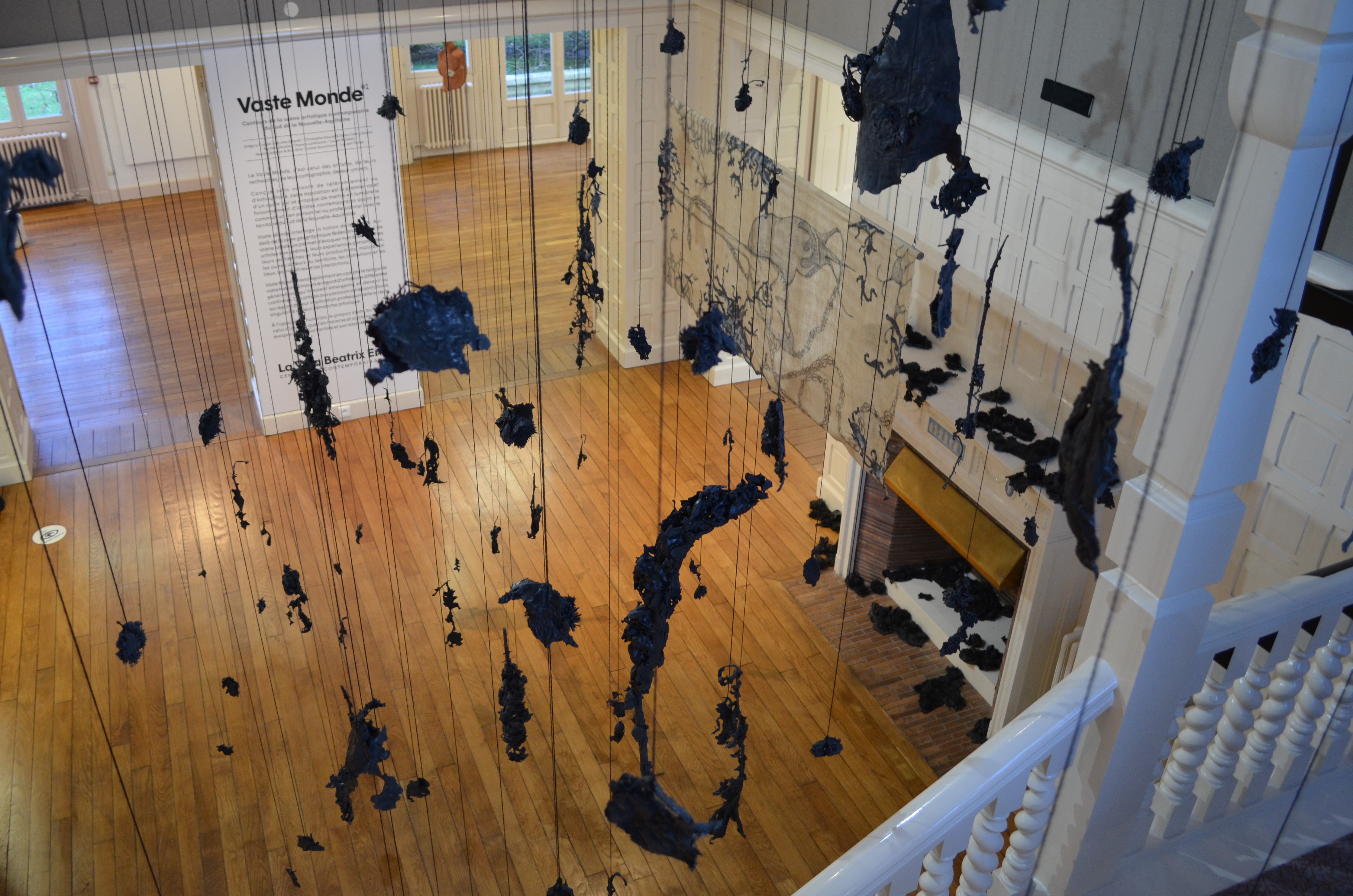