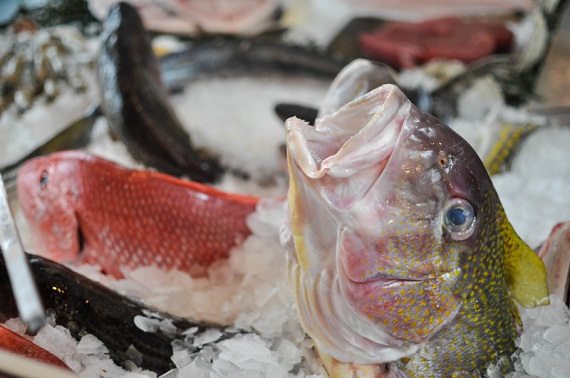 By Ted Danson and Andy Sharpless.

I love seafood — from succulent scallops to salty anchovies, seafood is an increasingly popular meal in my own home and across the United States. Yet consumers searching for sustainable seafood will find very little information about the seafood they eat. Even worse, the information that is available is frequently misleading or fraudulent. Recent studies by Oceana discovered that 33 percent of U.S. seafood Oceana tested was fraudulently labeled.

That’s why I was thrilled to hear President Obama announce his initiative to comprehensive federal program to combat seafood fraud and pirate fishing today, while attending the State Department’s Our Ocean conference. The evening before the President’s big announcement, I spoke to conference guests about how over-fishing, illegal fishing, and seafood fraud threaten both the health of our oceans and our food supply. As a longtime ocean activist, I know that, without a doubt, tackling seafood fraud and illegal fishing is one of the most important things we can do to protect our oceans.

Seafood fraud refers to the mislabeling or misidentification of seafood. This substitution can happen at each step of the supply chain — at the restaurant, the distributor, or the processing and packaging facility. It can also occur deliberately, when high-quality fish is exchanged for a less desirable, cheaper, or more readily available species.

Seafood fraud can occur anywhere. From 2010 to 2012, Oceana conducted one of the largest seafood fraud investigations in the world to date, collecting more than 1,200 seafood samples from 21 states to determine if they were honestly labeled. DNA testing found that an astonishing 33 percent of the samples were mislabeled, according to U.S. Food and Drug Administration guidelines.

Seafood fraud isn’t just a labeling problem — it directly threatens human health, as consumers may unknowingly end up eating a fish species riddled with contaminants, toxins, or allergens. Fraud also hinders consumers’ ability to make an informed and sustainable seafood purchases. It also disguises the true impact of overfishing by fooling the public into thinking that there is a ready supply of many overfished species.

Finally, seafood fraud harms fisheries and fishermen, by creating a market for illegal fishing. When seafood is not well labeled or tracked, it makes it easy to launder illegally caught seafood products through the U.S. market. Illegal and unreported fishing undermines conservation efforts and hurts honest fishermen. The intent of the Our Oceans conference, as Kerry described in his own editorial, is “to create a global movement to protect the ocean and its resources.” I am honored to have been a part of this historic event, and I am immensely pleased that our President is taking action to combat seafood fraud and illegal fishing. One of the ocean’s greatest resources is seafood, which already feeds millions of people each day. By cracking down on seafood fraud, we can ensure that the oceans remain a plentiful source of healthy food for generations to come.