In Nervei, you cannot avoid Nature and you cannot tame it. So you have to live with it. 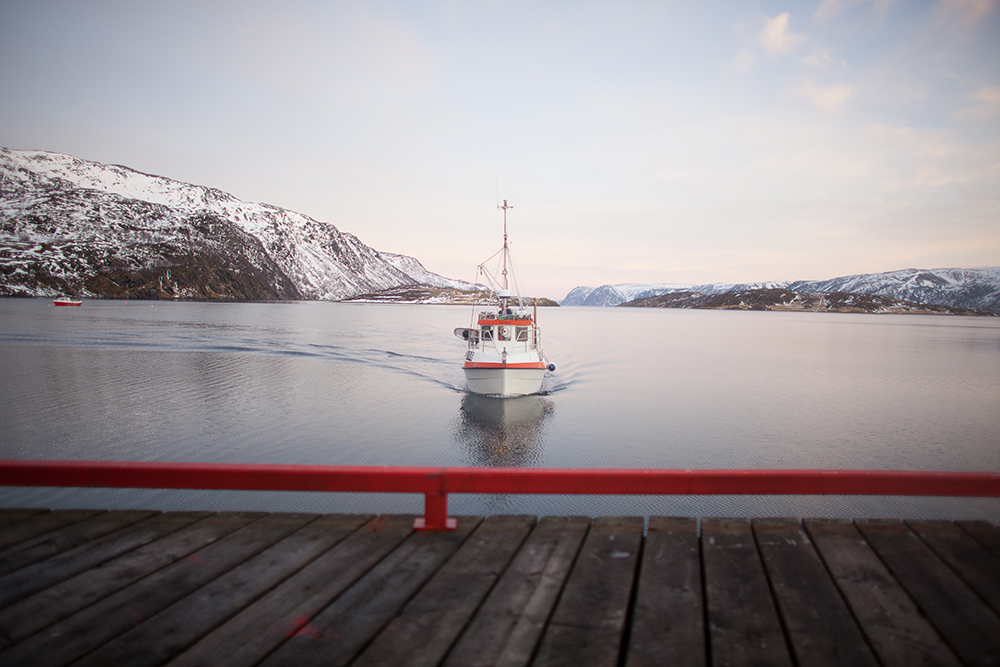 "Here, I have to fight against wind, snow, cold and ice. During winter, I risk my life when I go shopping. But I never felt so alive." Those words were the motivating factor for French photographer Lorenzö to undertake his 3 months-journey to Nervei, Norway.

Born in Paris 37 years ago, Lorenzo works as a photographer and vegan chef in Helsinki. He likes the fact of expressing himself throughout food and is a deep lover of his adopted country, especially "the environment, people, space, the scents and skies." He stresses this point: "Living in Finland is a choice, not a exile."

In 2012, the French photographer went to explore some parts of Finnmark county in northern Norway. "We went without an agenda, with open hearts and sincere eyes. We met a lot of people and heard lots of stories. But that's a specific encounter in Gamvik that gave me the sparkle that eventually became “Way North”."

It took Lorenzo two full years to make this project come to life. "I did a recognition trip in November 2014 with Arve, a guy I met in Finnmark two years before. I chose to go to Nervei with cameras and equipment I could trust. There was about 150 kilos of gear, food supplies and all the ingredients to make caffenol. Taking a plane was out of question so I drove my campervan there with my girlfriend Jaana. We started from Helsinki to Oulu, Muonio, Karasjok, Gamvik and finally made it to Sjkånes. Jaana went back to Helsinki and I parked the camper in Skjånes. After having checked at least 9 times if the handbrake was on, I loaded the equipment on a boat and sailed to Nervei." 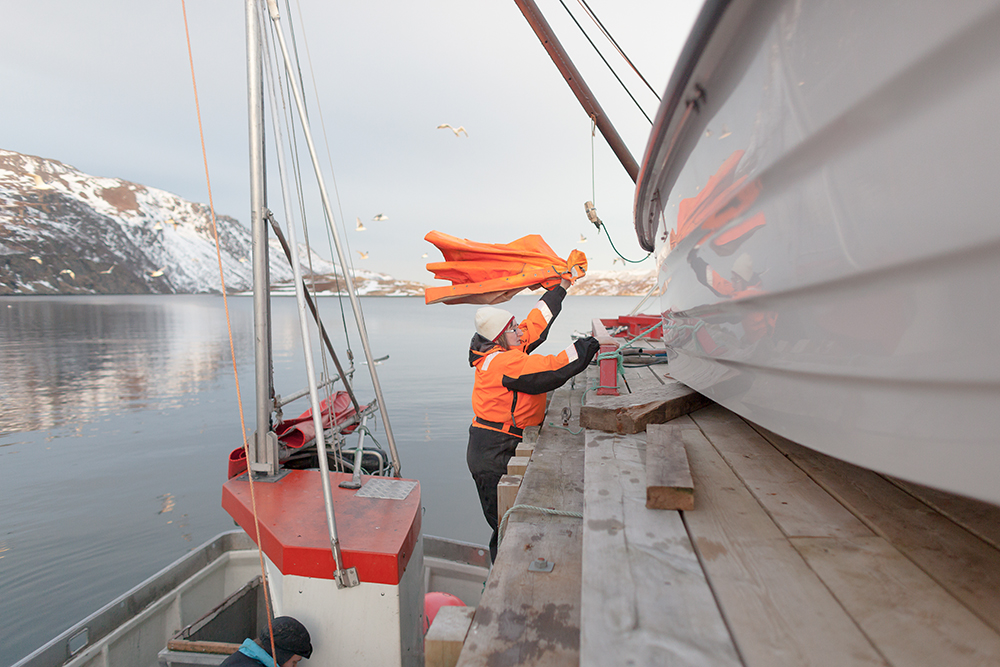 Situated along the Barents sea, near the Norwegian Sea, Nervei is described as as small village in Eastern Finnmark where the main industries remain sea harvesting and farming. Still today, as there's no official road leading into Nervei, commuting is mainly done by boat. Lorenzö explains: "At first, choosing to stay in such a place beaten by the winds, where it's cold and totally dark six months per year seems to be a bit weird, if not crazy. There is no shop and no bar in the village. In winter, if you need something, either you ask your neighbor, you take the boat or you take your snowmobile and drive half an hour through the mountain to reach the place where you parked your car. Then, you drive your car if the main road is open or you wait for the convey if the road is closed. It may sounds like a huge hassle but that's the beauty of it. If you stay long enough in Nervei, you'll start to understand the deep meaning of being in such a place." That's what Lorenzö did. He stayed there during three months. He got used to a certain kind of loneliness and rushed into a deliberate isolation. "In Nervei, I discovered the benefits of daily routines. I was waking up as early as I could, made coffee, checked the Yr.fi website for the weather, checked Marine traffic to see what was happening at sea and how many boats were out. Then I would go out. Nervei taught me to get rid of the unnecessary and, above all, taught me patience." 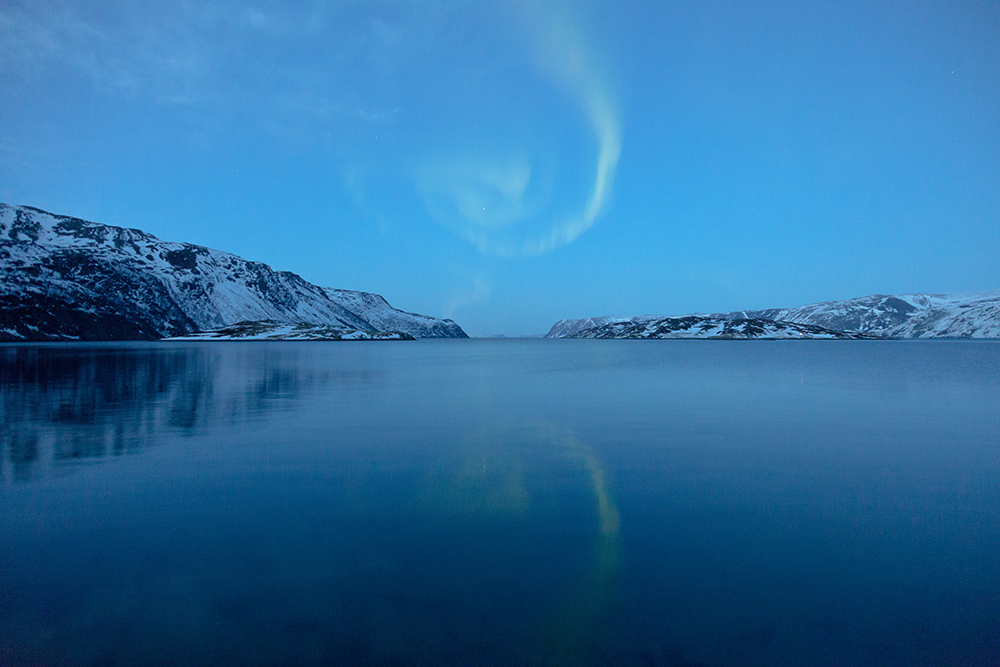 Before spending few weeks in this remote part of Norway, Lorenzö had this urban-neoromantic vision of the relationship between men and nature. "But reality was slightly different" he adds. "People in Nervei see Nature as a resource: Although you respect it, you deal with it and have to exploit it everyday. For the inhabitants of Nervei, Nature is a source of revenues and, somehow, a source of food. But it's also an obstacle that you have to know well in order to get over it. In Nervei, you cannot avoid Nature and you cannot tame it. So you have to live with it. Life is entirely shaped around nature. If the sea is too bad, you can't fish. If the wind is too strong, it can cut the electricity. If there is a storm, internet falls down. Having a mobile phone in Nervei isn't very useful : there is no network coverage there…" 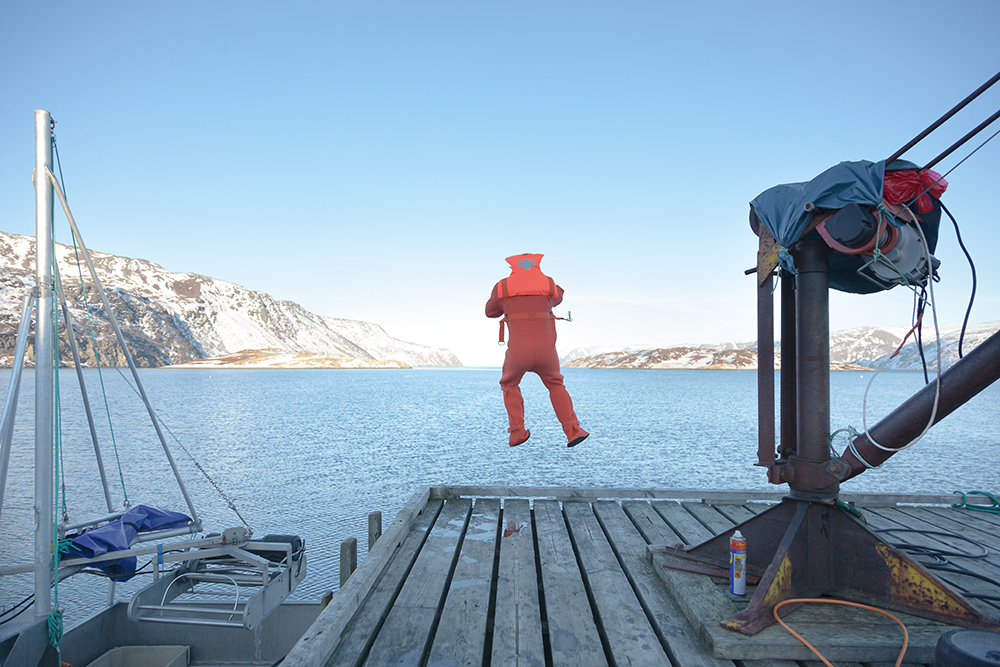 Located along the shore of Langfjorden, an arm of Tanafjorden, Nervei's main exports are cod, dried fish and king crabs. The residents consider the sea as their main natural resources. "Sea is literally everywhere. Although Nervei is not an island, being there, especially in winter, gives the feeling that you are not on dry land anymore. Nervei has the highest fishing boat concentration per capita in the whole Finnmark. Sea remains the main source of money for the village but it is also a way of transportation and a link with the “outside world”. In Nervei, almost everything and everyone comes and goes by the sea. The main “kaia” (meaning "quay" in Norwegian) is a social hub and an exchange platform where people gather twice a day and when the ferry comes." Far from the romantic stereotypes, the relationship that men hold with the sea cannot be reduced as 'coming back to the true essence of life'. Lorenzö explains: "People in Nervei are also used to some modern aspects of life. They are not hermits hating the idea of modernity and progress, or neo-hippies rejecting our society. Most of them really enjoy the modern comfort and try to make their life as comfortable as possible. The village has public lightning, people have big screens in their living rooms and brand new snowmobiles. I guess this is how people get used to the raw environment : by trying to make their life easier." 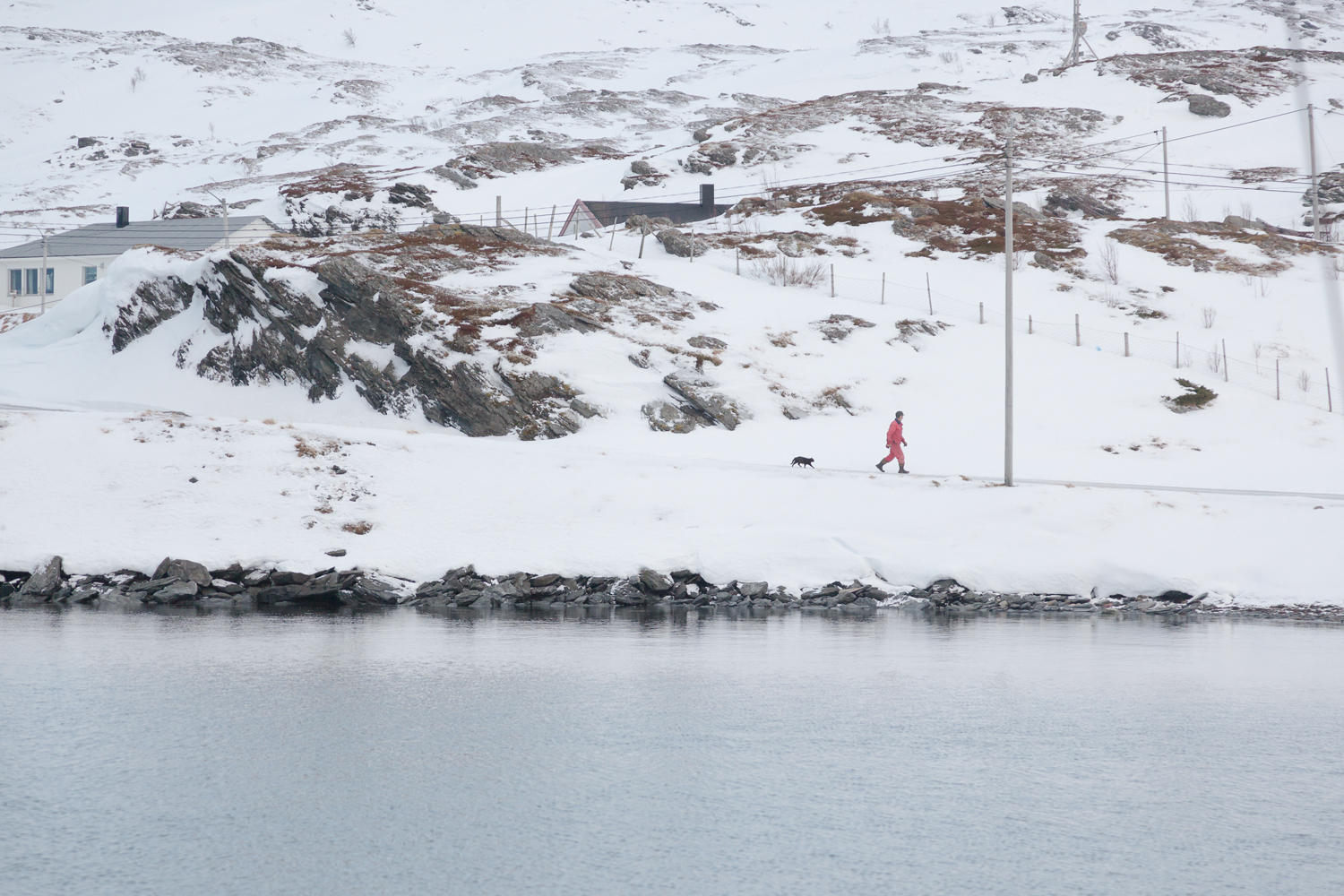 The French traveler knows how to describe the raw and genuine close links that connect men to nature. In a small description of his work, he writes: The wind, hesitates, seems to choose his direction, making shrubs and small trees lean in respect. Then he changes his mind and suddenly decides to calm down, just to surprise everyone by turning into a gale that shakes and rattles the moaning houses. Men definitely seem to be at the elements' mercy. "You cannot tame nature. In winter, when there is a storm, you stay home. If the storm cuts the electric line, you light the candles and start a fire. In Nervei, planning a journey is quite hard cause your schedule entirely depends on the weather. Of course, with the snowmobile, people are more autonomous and, to some extent, less dependent on the weather. But when you have 27m/s winds and when the visibility is close to zero, even with the best snowmobile, you cannot go anywhere. So you learn to be patient and wait." 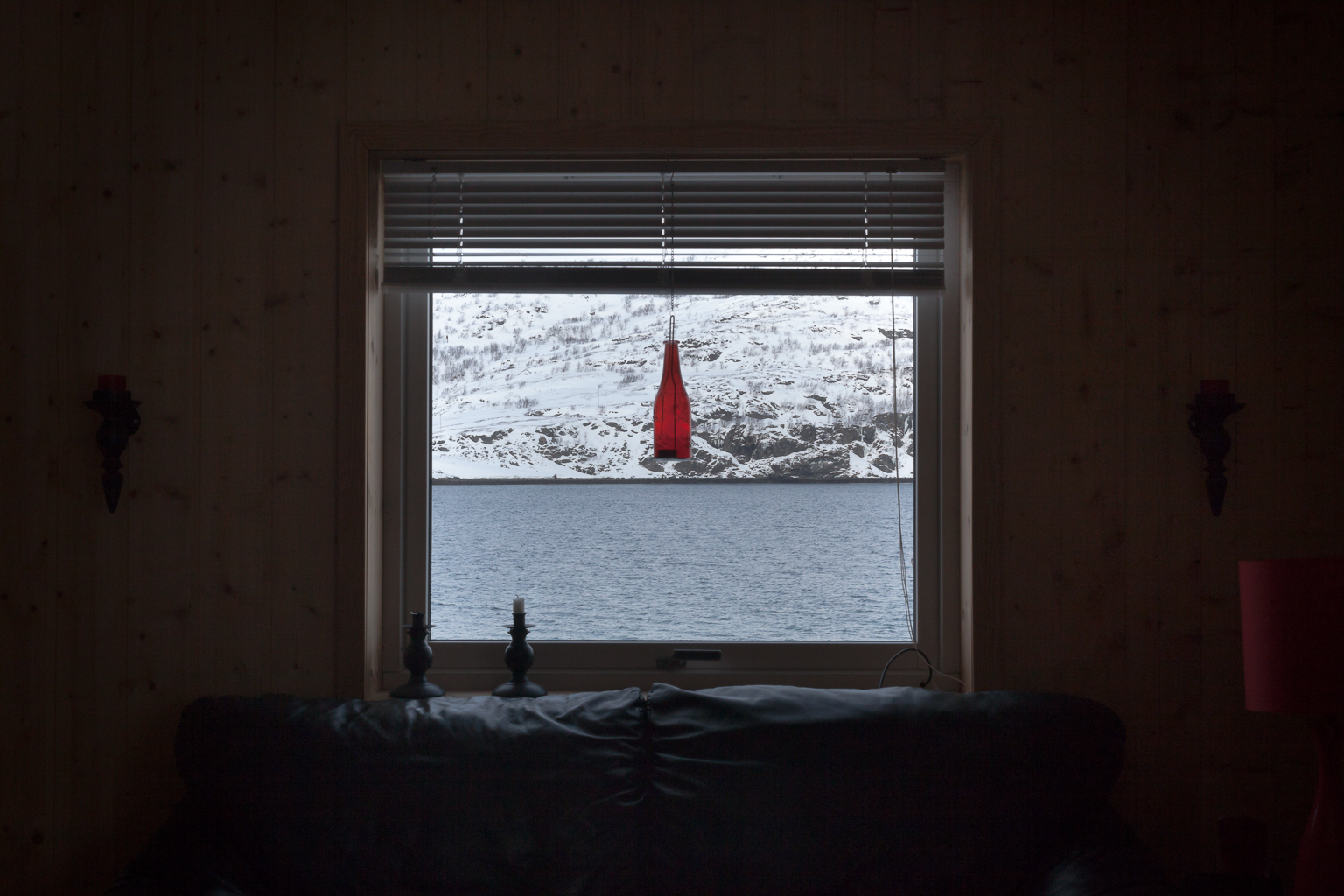 "Way North, Chronicles of Nervei” will be exhibited at the Northern Photographic Center in Oulu, Northern Finland, in September 2016.