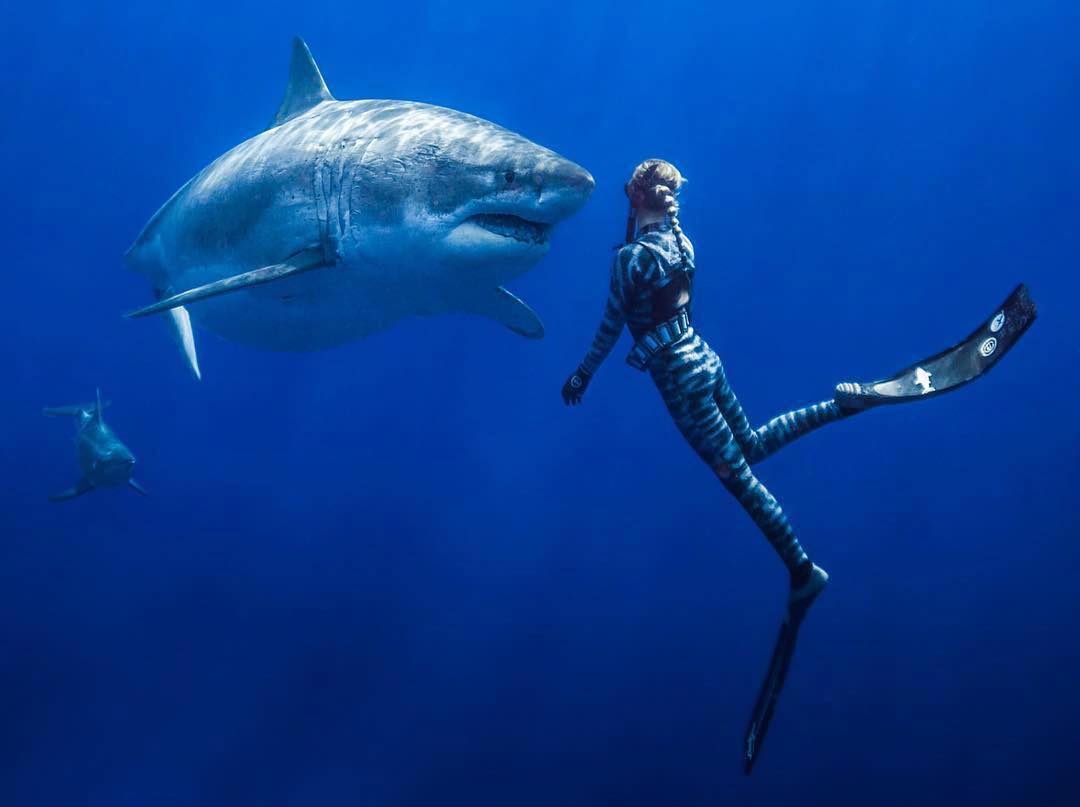 What it’s like to lock eyes with a great white as it slowly and directly approaches me is a feeling I’ve been fortunate to experience many times before but how’s the rough toothed dolphin escort too. I can’t say enough about the importance of sharks for healthy marine ecosystems, for the ocean, we need sharks and yet, perhaps because of the negative and inaccurate way they are portrayed in mass media many people do not care that they are being killed at a rate of 70,000,000-100,000,000 every year. What’s worse, they are killed mostly just for shark fin soup or for shark fishing as shark sport fishing. I would encourage you to see the cruelty and waste and compare it to this reality of peaceful and respectful coexistence. I do not encourage people to do this. I’ve been working with sharks for over 15 years, over 30 species including white sharks all around the world. They are apex predators not monsters nor puppies, but this was the gentlest grandma great white shark I've ever met. Deepest gratitude for my team and the incredible shot I will cherish forever

We really need to all be working together. Put the egos aside and let’s work together to help save sharks for the next generation if not for ourselves.

The first great white shark I ever swam with was in 2005 off my home Haleiwa with a similarly large great white shark who also rocked the boat I was on at the time working with sharks. I guess I am lucky that history repeats and not much has changed. What has changed though is shark populations are severely declining but for the first time ever I’ve seen this huge shift in perception in the last 5 years mostly due to imagery and the work that Ocean Ramsey and the team at One ocean diving and @oneoceandivingprogram and conservation and research division does.

In this shot, Ocean Ramsey is in the right place at the right time. The reality is that this moment took years or even decades to play out this way and I’m going to say it is due karma for Ocean. I spent the last decade trying to keep up her. Ocean is always working late into the night and getting up super early for work, writing papers for permits, shark research, conservation, leading dives, training safety divers, creating non profits, writing to senators and CEOs, doing educational out reach, organizing reef and beach clean ups, creating shark conservation designs and a clothing line all for shark conservation.

Ocean has dedicated her life to sharks and that is the biggest part of why I love her so much. She doesn’t do it for ego or fame, purely for love and hope that people can see that. She actually is a shy person that would rather keep to herself but the only reason she speaks up and gets in front of a camera is for them, the sharks. She learned early on after finishing her marine bio degree that there will be nothing left to study if we don’t speak up for these animals.

I hope my conservation images like this help people to question their perceptions and realize the beauty, and importance of sharks. I also hope that they inspire the kind of compassion and connection we need to have with nature and sharks, to help protect them and coexist along side them. You don’t have to love them but they do need to exist, they are absolutely critical for the health of marine ecosystems which all life relies on. Everyone has a part to play in shark and ocean conservation.

Education is the key. The only sad thing in all of this is to see other conservationist and scientists waste their valuable time attacking other scientists and conservationist. We really need to all be working together. Put the egos aside and let’s work together to help save sharks for the next generation if not for ourselves. Focus on the sharks and save them is what Ocean is about and I wish more people were like her. This amazing photo is not mine. The photo has been taken by @camgrantphotography, also in in the right place at the right time.