The hurricane of ice in the Ross Sea

It is so cold that ocean spray turns to shards of ice before it hits the deck. The waves have grown to mountains of water exceeding 18 meters tall from trough to crest. It is in this moment, that we feel the most alive. 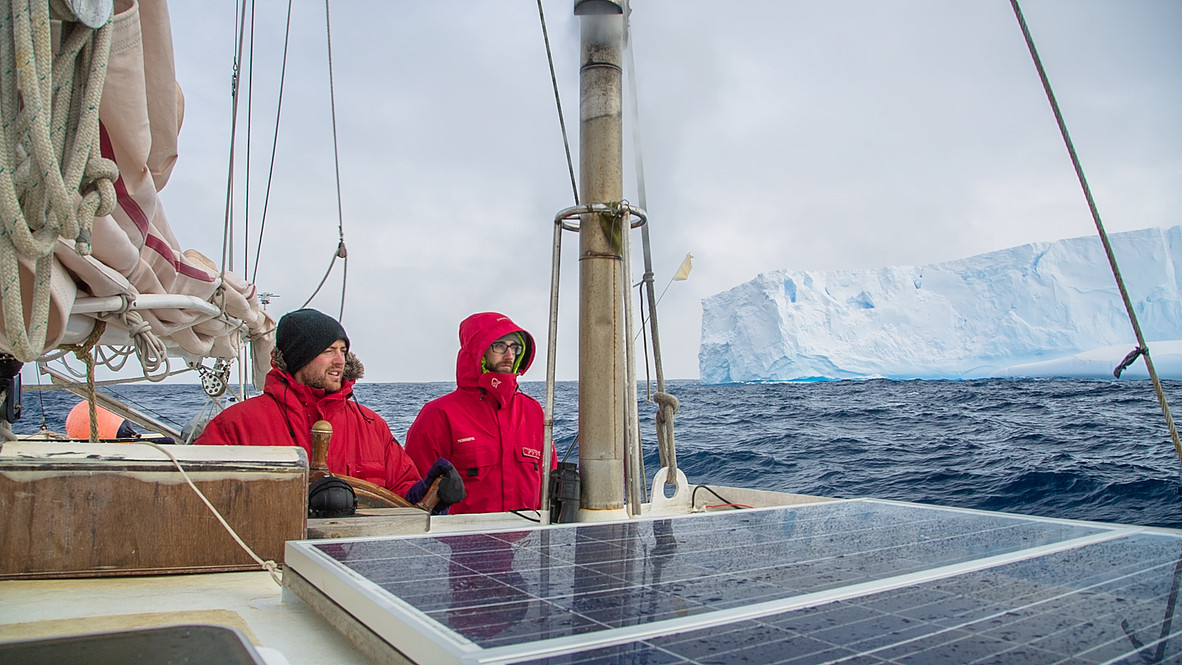 It is dark and stormy, with snow blowing straight at us and we are driving blindly into pack ice. The waves seem to be growing dramatically every minute. The guy at the bow is shouting instructions and warnings back to another guy at the halfway mark, who runs across the icy deck towards the helm to tell us to go “hard to starboard!” Just as we begin turning, we see a piece of ice the size of a school bus passing along our port side, grinding along the hull as it goes. Lots of warning….and to top that off, we have to motor ahead at 3+ knots if we even remotely hope to be able to control the direction of the boat. Infinity weighs 160 tons, so even going slow it takes forever to stop. Slamming into an iceberg is like slamming into solid stone, at any speed something has to give, and it’s not likely to be the stone. The quantity of ice in the surrounding water is increasing rapidly, along with the size. Andy, our Scottish watch leader, keeps adding speed, as we lose the ability to hold course. All the while massive chunks slide past on either side. In this sobering atmosphere, Andy starts talking about “real adventure” and how hard it is to find these days.

Having lived on the high seas for the last 20 odd years, I can’t think of anyone I would rather have leading this madness then Capt. Clem. Though as he gets to the helm, even he seems a bit unnerved by the situation. “Why didn’t anyone get me fucking sooner! ...I can’t hear you clearly! None of this American nuzzle buzzle. There’s a solid wall of pack ice dead ahead! Can’t you see that! That’s not water, that’s ice!” The full force of the storm has yet to arrive and we’re still 30 miles off from our intended anchorage. 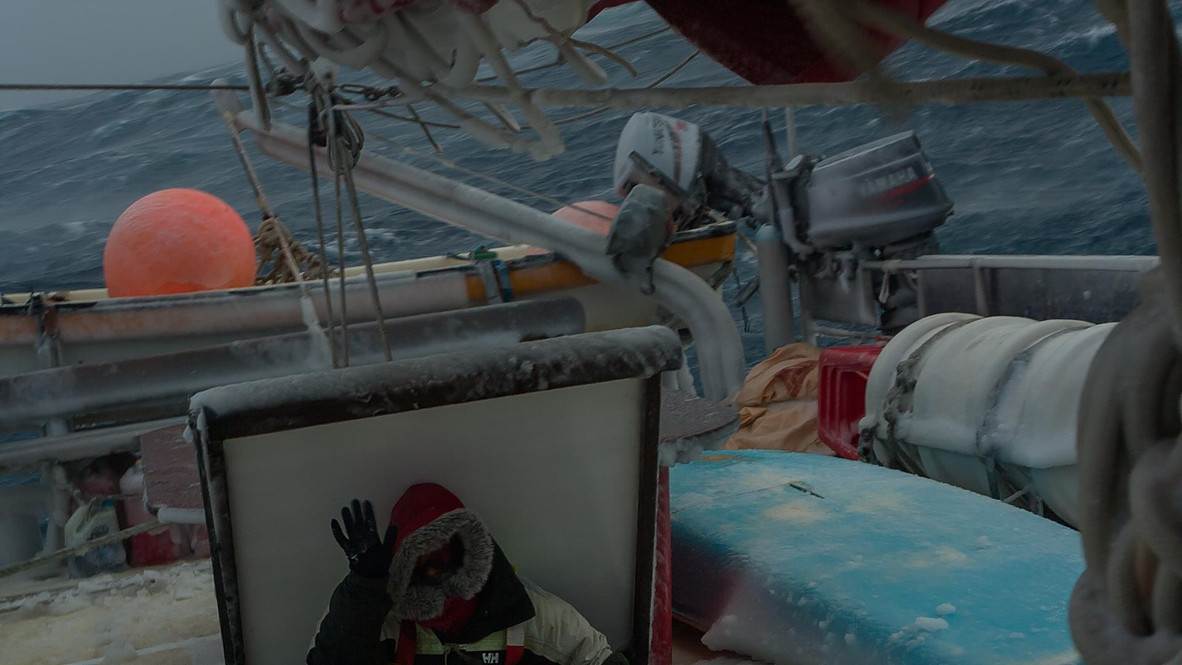 As I make my way on deck the next day, I find the situation has deteriorated further. Our Canadian Electrician, David Bowie (real name) is at the bow screaming back to the helm “hard to port!” Just as a real hull cruncher passes with not much more than two feet to spare. All around us is thick pancake ice and off in the distance is a sheer wall of pack ice that we seem to be heading directly for. We soon discover that the anchorage area is socked in with ice and we have no place that is protected to anchor. It is at this point that the full force of the storm arrives. Not the 20 knot peripheral system we were hoping for at this latitude, but an 80+ knot force 12 hurricane of ice with wind gusts exceeding 160 kpm. We have no choice but to ride it out on the open ocean, but we have to quickly get away from the large fields of ice.

It is so cold that ocean spray turns to shards of ice before it hits the deck. The waves have grown to mountains of water exceeding 18 meters tall from trough to crest. An interesting site few of us have ever seen, they are breaking on themselves in the open ocean, as if they were being pushed up by a reef or the shore. Going on watch is a sobering experience. It’s less of an active navigating experience and more of what one crew member termed “riding space mountain for three hours”.

It’s so cold, that our diesel has begun to freeze in the tanks, and from the white smoke the engine is emitting, we suspect our fuel is contaminated with seawater. We are not sure how the water made its way into our tanks, but our engine is cutting in and out and were losing fuel injectors we have no replacements for.

To make matters worse, the waves crashing onto the bow are so strong they have bent back the steel anchor plate, allowing water into the forward anchor locker. Infinity has taken on so much water, her bow is riding noticeable lower in the water, and she’s digging ever deeper into the waves. 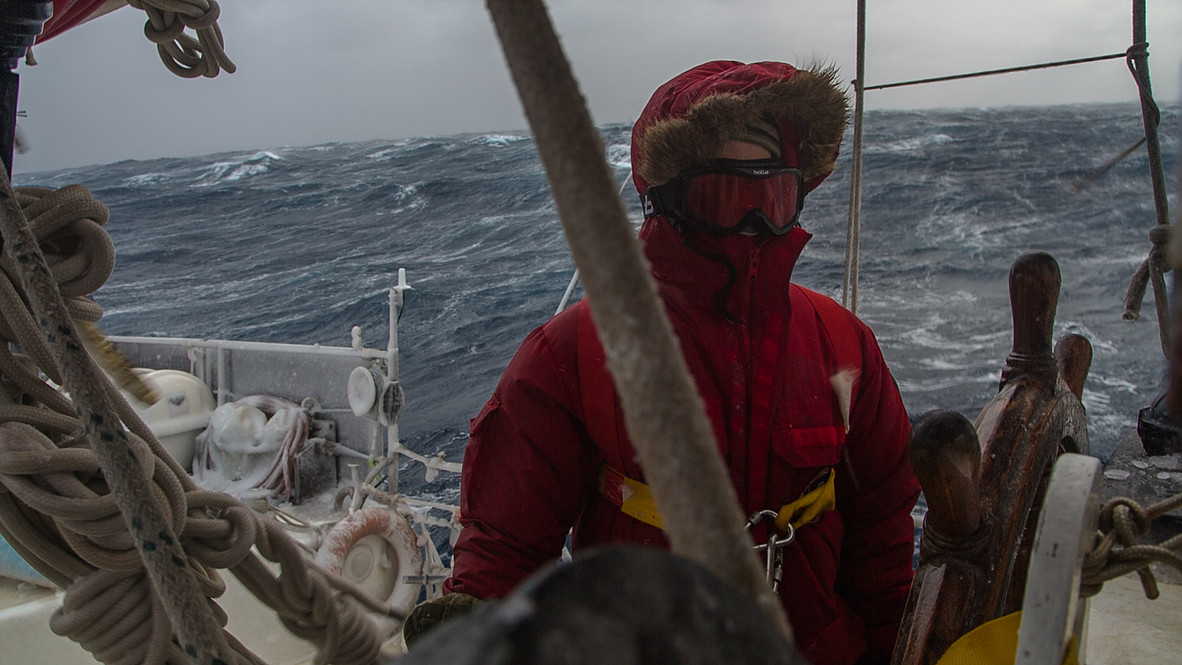 The engine throttled up full, we are lurching in horrible, skyward-thrusting, gut-wrenching circles. Due to the power of the wind though, we seem to be going backwards. We have to harness ourselves in and bear-hug something solid, or we’ll be ripped off the helm. If we go overboard, we’ll be dead before the person next to us realizes we are gone.

Every couple of hours, we are forced to shut off the engine so we can clean out the rapidly clogging fuel filter. It is during one of these cleanings, the boat drifting at the mercy of the wind and waves, giant mountains of white capped waves cresting and breaking on and around us, that we spot a large iceberg, directly in the path the waves are taking us.  Fuel filter quickly back in place, and we are trying to restart the engine, before we get dashed against the ice. The starter turns and turns, but the engine refuses to catch. For what feels like forever, it just turns, straining the battery. It is in this moment, that we feel the most alive. This is what we are truly after. As we hang on for our lives, in the middle of the most dramatic storm we have ever seen, with front row seats to one of the greatest natural spectacles on earth, we have collectively reached a state of transcendent ecstasy. We’re in a giant universe of forces that are out of our control and we’re feeling very small.

The engine catches and we apply the throttle, holding our breaths as the boat slowly increases the distance between us and the berg. We will ride space mountain for two days. 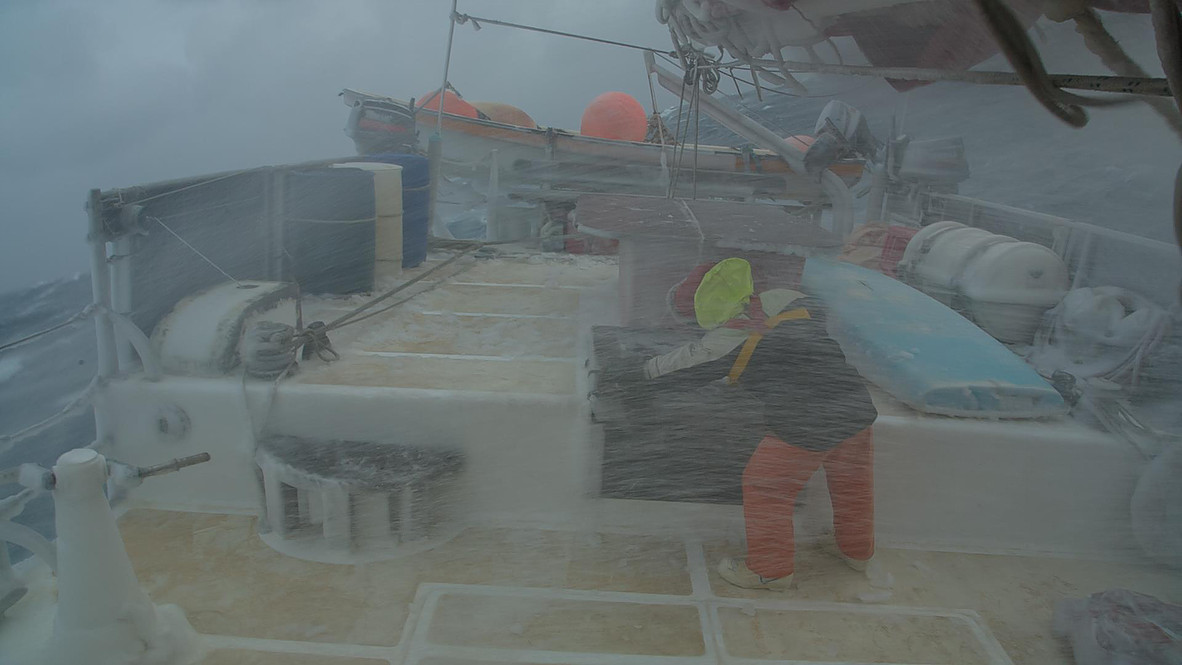 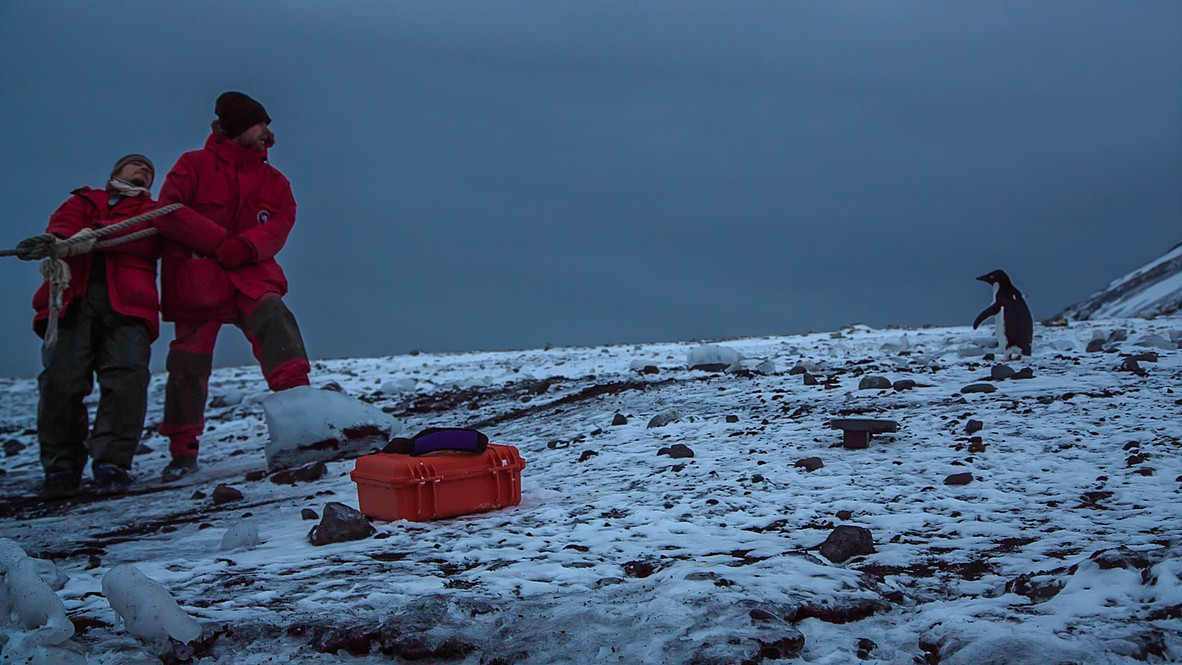 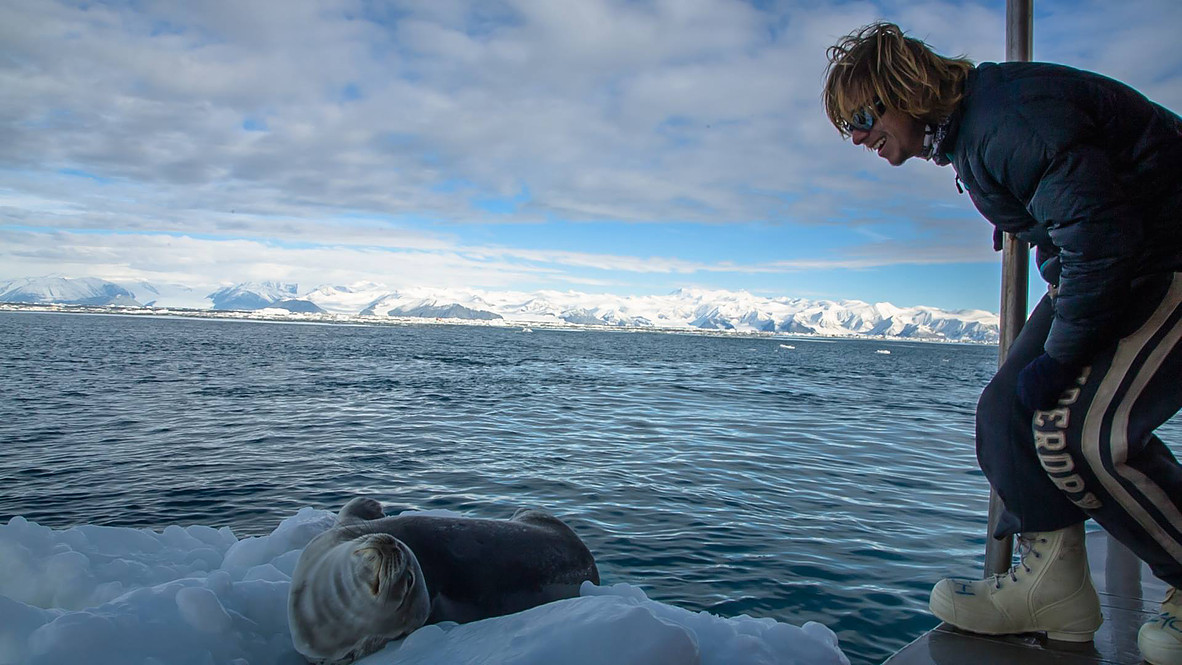 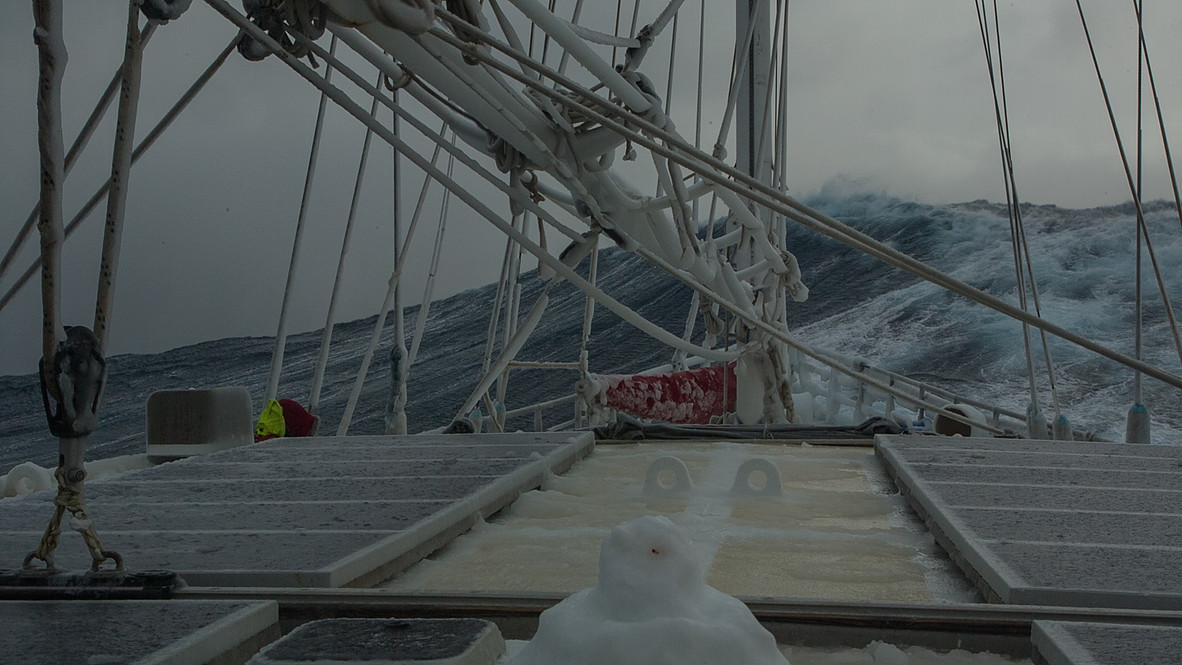